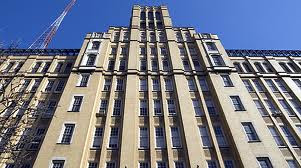 The Panel for Educational Policy continued its winter residence in Ft. Greene with a meeting Wednesday night at Brooklyn Tech High School.

Chancellor Black made her debut at the PEP by reading a four minute prepared statement but did not otherwise contribute to the Panel discussions. The Chancellor's statement called for layoffs of the city's least effective teachers instead of least experienced ones. She declined to explain how teacher effectiveness would be measured.

The public comment session focused on the unpopular decision to insert a new selective high school in the John Jay building in Brooklyn. Many spoke against the proposal including local electeds, parents, teachers and two principals of schools already in the facility. The outspoken opposition from DOE administrators was surprising given the risks of retaliation they face. The resolution for co-location passed. The Bronx representative and I abstained.

Other resolutions included the placement of PS 151 in a permanent location in M066, previously the home of Richard Green High School. For over twelve years the Yorkville community had no school and the children there were lotteried off to neighboring schools. PS 151 was introduced into an old Catholic school temporarily until its placement in M066. The Richard Green HS was placed in 26 Broadway, honoring a long standing promise of DOE for a suitable facility rather than the elementary school building where it was housed. Downtown parents were disappointed as they sought 26 Broadway as expansion space for the popular Millennium High School.

In a meeting with downtown Manhattan parents at Speaker Silver's overcrowding task force, Chancellor Black drew criticism for describing school construction and siting as a series of "Sophie's choices". It was unfortunate that the chancellor chose to invoke the Holocaust to lend gravitas to what is simply a fallacious argument. The chancellor and mayor are obligated under the state constitution to provide school facilities to each and every child. State courts have repeatedly found large class sizes to violate the rights of our children to a sound basic education. There is no choice. Instead of offering false choices, the chancellor should focus on providing facilities to areas of the city, like downtown Manhattan, that were neglected in the administration's reckless rush to build housing without an appropriate complement of schools.

This month's slate of contracts included one of the most egregiously wasteful of those ever presented for approval. Consultants from the Parthenon Group will receive $352,000 for two months of work. According the the contract description, the consultants will support the development of a new talent management system: "the goal of this engagement effort is to ensure a level of understanding and buy-in across key groups -- at the central, network and school levels -- that will be responsible for implementing and using the system". So despite all the corporate management skills inserted into DOE, we have to pay consultants to get our own people to work together. Deputy Chancellor John White tried to defend the contract by saying it was the first step in developing a system to decide how to evaluate teachers. But if the mayor and chancellor have already said they're prepared to layoff teachers based on effectiveness, then why are we paying consultants to start to think about how to do that?

Document with all contract descriptions can be found here.