Cuomo: Cut taxes on the wealthy, and slash school budgets to the bone 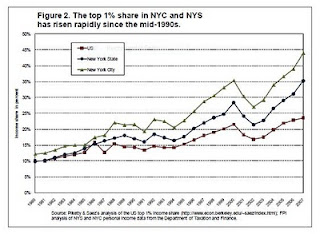 New York's new governor, Andrew Cuomo is insisting that that the surtax on individuals making over $200,000 should be allowed to lapse – why? Because "working families can't afford it" !!! Cuomo is quickly turning out to be a DINO (Democrat in Name Only.)

He is, of course, quite willing to layoff state employees, cap property taxes, and cut education spending to the bone instead.

According to Frank Mauro of the Fiscal Policy Institute, allowing the surtax to lapse will cost $5 billion per year.

Meanwhile, check out a new FPI report, revealing that NY State has the most unequal income distribution of any state in the country; and NYC the most unequal among cities. See the graph to the right, showing that one percent of NYC residents now make almost half of all income.

In discussing the PISA results, Diane Ravitch reveals that more than 20% of US kids live under the poverty line. Most of the nations (and cities) that compete on PISA have far lower rates of poverty.

At a time of fiscal stringency, it seems crazy to talk about helping lift children and families out of poverty. Critics say, "We can't afford to do anything anymore," "Sorry, the money is all gone," "No one should pay any new taxes," "This is not a time for social innovation; it is a time for educational innovation." But in light of the overwhelming evidence of the dire consequences of persistent poverty, it seems even crazier to ignore it and to assume that we can reach the top of the international achievement tables by closing schools, firing teachers, and hastening privatization.

See also this chart, below, from the Shanker blog, showing the unfairness of the current tax structure; and that the poorer you are, the larger percentage of your income you pay in taxes. 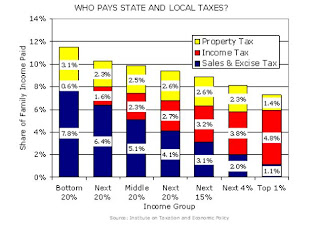 Cuomo of course is not alone. Chris Christie, the new Governor of NJ, also wants to cut taxes on the wealthy…. at the same time as he’s cutting funding for the state’s poorest schools, in violation of a court order.

But not everyone connected with education will be happy at the decisions to cut taxes on the wealthy. Joel Klein will get to keep more of his hard-earned cash, as he goes to work for Rupert Murdoch. He’s due to make an estimated $4 million the first year at NewsCorp, heading up their new online learning division.

And on it goes.

I wonder who will be worse: Cathie Black or Andrew Cuomo..

The 2% tax cap during economic decline is going to spell disaster for NY schools. I'm writing about this on my blog and I think you may be intersted in what I'm covering.

NYC invests close to $20,000 on each student each year (21 billions for over 1 million students). How many of one million students will pay back $20,000 taxes for the city to break even factoring inflation over 20 years? Not to mention that earning $20,000 income per year is no easy task for many of them.
It is just not sustainable to spend that much money with very doubtful future returns.