UPDATE 8/20/18: After reading a Michael Mulgrew oped today that refers to this leaked Parthenon report from 2006 in the context of the debate over the specialized high school admission process, I realized it is no longer posted online at Chalkbeat (formerly GothamSchools) nor anywhere else I can find.  So I have now posted it here.

Note: DOE still refuses to comply with the suggestion of its consultant in 2006 to ensure through the high school admission process that no school is unfairly predicted to have a low graduation rate.  Instead, by sending certain high schools huge numbers of undercredited 8th graders, they continue to force schools to use substandard credit recovery programs or to cheat to raise their grad rates to the recommended level, or face closure.

On Tuesday, there were NYC Council hearings on the closing schools, featuring lots of heated discussion. The hearings were officially to consider two bills: one that would require DOE to report on student discharge rates at all schools, in which thousands of students leave the system each year and are never counted as dropouts. Jennifer Jennings and I wrote a paper about the rising discharge rates between 2000 and 2007, pointing out that over this period the rate and number of discharged students in NYC increased, and how this was a huge loophole that allowed schools to artificially inflate their graduation rates. The ninth grade discharge rate actually doubled over this period.
Another proposed bill would report on the fate of students at closing schools. One of the biggest tragedies is that among the students in a “phase out” school, only first time 9th graders who have accumulated sufficient credits are allowed to transfer to other regular high schools; other students who are not able to graduate over this period are fated to dropout, be discharged to GED programs, or take substandard credit recovery programs, with their chance at a meaningful high school diploma ended as well.Here is my testimony in support of both bills.
At the hearings, Jennifer Bell-Elwanger expressed DOE’s opposition to these bills, claiming that as written they violate student privacy, but one wonders if there are other reasons for their resistance to disclosing these figures.
During the hearings, Councilmembers Jackson, Dromm, Fidler, and Cabrera focused on the issue of school closings and class size, and angrily questioned Deputy Chancellor Marc Sternberg and Josh Thomases of DOE about why they hadn’t provided the large, low-performing schools with the same opportunity to reduce class size before closing them down that they provide to the small schools.
Dromm is a former public school teacher, and Cabrera is a former counselor at Walton and Evander Childs, two large high schools that have since closed. Both were insistent that the large schools had never been given a chance to improve, and were dealing with many of the most difficult, at risk kids in the worst conditions, with overcrowding, huge classes and few counselors –up to 700 students per caseload.
Cabrera said that it was not the size of schools, but the class size the quality of leadership and the amount of support that determined a school’s success or failure. And he pointed out that as new schools have opened, thousands of high-needs students have been diverted to other large schools, overcrowding them and propagating a vicious circle.
Thomases insisted that having a small class of adults under the direction of a principal (meaning fewer teachers at a small school) was more important than providing smaller classes for kids. Sternberg said “class size may matter but…” when Robert Jackson interrupted him:, “ You say, class size may matter? We know for sure it does, research shows that it does.”
Jackson finally got Sternberg to concede that “no one can dispute that class size can impact the quality of instruction.”
Council members Dromm and Koslowitz had recently visited Jamaica HS, slated for closure, and expressed dismay about how the school not only had much larger classes than the new, more selective small schools in the building, but also fewer counselors and less technology.
In addition to these clear inequities, there was discussion about how in many cases, DOE had left dysfunctional principals in their positions for years, despite protests from parents and teachers, as in the case of PS 114K – as if they wanted to undermine the schools intentionally. Even Special Investigator Condon has said he has no idea why the principal was left in her position so long, to run the school into the ground.
CM Leticia James was particularly angry about the plan to close MS 571, where, she said, there were three principals in recent years; one died, one retired and one moved on, with no stability and no direction provided from DOE.
Paymon Rouhanifard of DOE’s Portfolio Planning responded with the DOE buzz words that they “hold principals accountable” but essentially, there was no principal to hold accountable – and instead, by closing the school, they are punishing the kids.
Meanwhile, a new NYC Independent Budget Office report shows that the schools on the closing list have 50% more students who enter the school with special needs; significantly more homeless and low-income students, and more than twice as many entering 9th graders over age for their grade. Nine of the 25 schools on the closure list have special education enrollments of 20 percent or more; four have more than 10 percent of their students living in temporary housing, and the percentage of students in these categories have increased at a faster rate in recent years at these schools than in the city as a whole.
Yet as Parthenon consultants 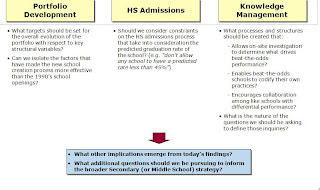 pointed out to DOE in a power point in 2008, it is possible to predict the likelihood of success or failure of schools, depending on how many overage students are sent to the school. Their analysis concludes by asking this poignant question,
“Should we consider constraints on the HS admissions process that take into consideration the predicted graduation rate of the school? (e.g. “don’t allow any school to have a predicted rate less than 45%”)
Yet to this day, DOE has ignored this recommendation, and continues to send disproportionate numbers of high needs students to certain schools, well aware of how this sets them up for failure. In fact, as the IBO study shows, as these schools decline in performance, the DOE overcrowds the school with even more high-needs students. The process of decline accelerates, under the willful direction of the DOE until the school is closed.

Check out Gotham Schools, which posted the Parthenon power point that I made available to them, and NY1, which reported on it as well.
Posted by Leonie Haimson at 1/27/2011 11:45:00 AM

So when does Bloomberg & Klein get indicted?

To the Education Mayor, it seems that Children First means sacrificing children first to further his agenda. Our kids need a real opportunity to learn, not a system that rewards people who failed in the private sector with high paying jobs and no-bid contracts.

It is a sad situation what the education mayor and his co-horts have done to destroy education in our city. The testing mania and charter school misinformation is very unfortunate. The teachers in our city have been blamed for everything and new attacks on pensions,seniority and misleading evaluations are spearheaded daily by Bloomberg's allies in the tabloid press. Sadly our children are not being prepared for college or the work force and our arrogant mayor really couldn't care less.