Leaked DOE memo: "Everyone is not alike"

One of the many unproven large-scale experiments on NYC kids is the rapid move towards more CTT (inclusion) classes for special needs children who were formerly in more small scale settings. The push towards CTT often happens regardless of the student’s Individualized Education Plan (IEP).

The leaked memo Rachel Monahan disclosed yesterday in the Daily News revealed a high number of special education students suspended in the Bronx, many of them emotionally disturbed, many of them from the new small high schools. These findings are in line with the NYCLU report, showing a sharp rise in suspensions under Bloomberg and Klein, with fully one third of those suspended special education students. 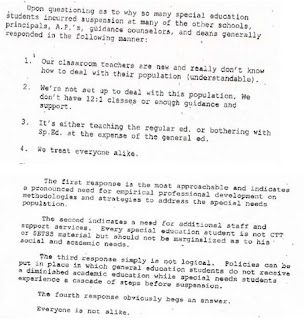 nclusion classes in the Bronx in small schools. These small schools by and large do not offer the 12-1-1 settings that these students often require and are mandated according to their IEPs.

This situation will likely worsen in the future as the DOE closes down more large high schools,and is simultaneously expanding CTT programs, while pushing for maximum class sizes of 34 in all CTT high school classes.

In addition, despite numerous pleas, the Regents ruled that there can be a higher percentage of special education students (exceeding 40 percent) in these classes.

Like the leaked Parthenon report from 2008, which revealed how DOE was informed in advance of how they had set the large high schools up for failure by sending them large numbers of overage students, this leaked memo shows just how careless those who work at Tweed truly are.

Sometimes, critics of DOE (like me) assume they don’t understand their policy errors, but often, they have even more evidence of their mistakes than we do, which they heedlessly ignore. It is shocking how careless adults can be with kids’ lives.

See excerpt from the memo above, which points out not all students are alike. But in the DOE flawed system, everyone is. Every NYC child is a victim of their unfounded ideas.
Posted by Leonie Haimson at 1/28/2011 06:43:00 PM