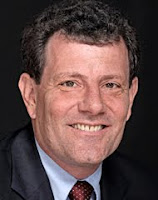 A week ago, Nicholas Kristof published a NY Times column in which he equated China's recent success in chess, embodied by a freakishly talented sixteen-year-old female named Hou Yifan, to success in its national education system. As if Bobby Fischer might have been a model for America's education system; Fischer's devolution into hermit-like irrationality and irrelevance is likely an analogue of the decline of American education in Mr. Kristof's rather confused world view. The notion that a three-sigma chess champion discovered (by her parents, not the education system) in a country of 1.3 billion people represents anything other than the laws of chance never seems to have occurred to our intrepid journalist, nor the fact that in China, the State immediately extracts three-sigma talents in any field from their standard educational system and shunts them into highly restricted, one-dimensional, "talent development" schools.
In his column published in this Sunday's New York Times, titled "China's Winning Schools?," Nick Kristof seemed finally to have redeemed himself, managing to get much of his assessment of Chinese education correct (although his assertion that Chinese teachers are respected is not really true; "feared" would be a better choice of words that "respected"). Nevertheless, he presented a balanced assessment for a change, one that acknowledges Chinese students' book learning excellence and the country's national educational efforts while also identifying some of its limitations (inability to promote creativity, inquisitiveness, and critical thinking skills).

Then, just when I was beginning to hold out some modest hope for him, Mr. Kristof inserted this sentence near the end of his column:

"But the real challenge [to America] is the rise of China’s education system and the passion for learning that underlies it."

Kristof has persistently and repeatedly confused "passion for learning" with societal and family pressure for economic survival, family dignity (traditionally called "face" in the West), and parental old-age security (children, particularly sons, have always been expected to do well enough to support and care for parents in their own age). Most Chinese families see education as virtually the only way to future security, an attitude drawn in no small part from a thousand-year-plus culture in which Confucian education was indeed the only path to government service and hence to economic success. Anyone who has studied Chinese culture and history also knows that Confucian education was grounded in the Chinese classics. Confucian education denigrated new (Western) knowledge and scientific fact-gathering (what the Chinese once labeled with pedestrian-sounding disdain "the investigation of things,"). Furthermore, educational mastery was demonstrated and measured not by what one could do with his knowledge but by its practitioners' ability to memorize and regurgitate classical texts and poetry verbatim. The carryover into the modern Chinese education system is blatantly obvious.

In reality, there is little or no passion for learning in China today, and most certainly not in Chinese schools. Students participate only to get through the system, to be successful in the exams which are the single sole measure of their "learning" (just as the multi-level civil service examinations were, for centuries, the single sole measure of Chinese scholarly learning). Few students today are curious to know anything beyond what their classes require of them, and no one reads for learning other than self-help-style books that many in China perceive as possessing the secrets to future success and wealth. The vast, vast majority of Chinese students are little more than sentient databases, spewing factoids and formulas on demand but grossly lacking inquisitiveness, creativity, and critical thinking skills; they are unable to use what they've learned to reflect in any meaningful, philosophical way on their lives or the world around them. Few Chinese homes contain books, few Chinese adults read books or magazines, and few Chinese at any level express interest in added knowledge from "documentaries" such as we find here on public television, cable, and movie theaters.

In my experience, "learning" in China means beating the education system to get the best possible results with the least possible exertion of effort; cheating is entirely permissible because only the ends count, not the means. Worse still, precious few adults among the many I've met in China show the slightest interest in learning anything new whatsoever once they are out of the education system. For an educated society, adult Chinese citizens are among the least curious about the natural world and about other societies and cultures of any people I have ever met.

Contrary to Mr. Kristof's view, there is in fact little or no "passion for learning" in China; there's only passion to bend the system to one's own ends in order to appear learned long enough to make it work for you, or until you find the path that will lead you to some modicum of economic well-being. That may be pragmatism, and in that culture it may be entirely reasonable. But it most surely isn't passion.

I read a book about China written by Kristof and his wife Wu-Dun more than a decoade ago, many of their predictions regarding different aspects of China came true. He was then WSJ reporter in Beijing and his wife was NYT reporter in China for several years. It should be safe to say that he knows more about China and Chinese than more Americans.
Clearly Chinese education system is far from perfect, but education system in US is in a crisis. No matter what you say about Chinese education system, the core value of its learning process is the respect for teachers, which seems to me to be the corner stone for the meaningful learning to build upon.

When we have invested for $20,000 on each student every year and have very little to show for it, we have long lost any right to idolize the current system, to brag being the best, and to put down others.

I was born and raised in Shanghai until the age of 10. In 1982, my family and I immigrated to New York City, where I attended public schools, including Stuyvesant High School. I went to a small private liberal arts college in Connecticut thanks to generous financial aid from the school.

Since 2007 I've been living and working in Beijing with my daughter who is now 8. For the past two years she's been enrolled in a half-Montessori, half local-Chinese curriculum semi-international elementary school in Beijing.

After the shock of having my daughter in a half-Chinese school for first grade, I sternly told her second-year Chinese grammar teacher that I will no longer tolerate my daughter closely following the brain-washing Chinese textbook that is core to the local Chinese curriculum. Surprisingly, the Chinese grammar teacher was sympathetic and did not require my daughter to recite the sometime extremely politically controversial texts (for example, Taiwan is part of China type of rhetoric - by the way most Chinese people think that's a fact, not political rhetoric) that all Chinese elementary school kids are required to know.

I believe Steve Koss has a much more realistic assessment of the current Chinese education system than Mr. Kristof does. The Chinese education system is now a corrupt and dysfunctional system where many teachers ask for private gifts from parents to ensure their kids will not be psychologically abused. The poor parents have no choice but to acquiesce. The kids hate the fact that they have been made into "learning machines" before they can even walk. That's just the lucky kids in cities like Shanghai and Beijing who can go to school. The unlucky kids living in the countryside saw their schools shrink by more than half in the last ten years. Many fatal school bus accidents are claiming young lives due to lack of affordable safe transportation options, if you follow Weibo, the Chinese version of Twitter.

The typical Chinese kids have no curiosity about the world. The internet is not used for learning information about the world but rather mostly for mindless gaming. Have you visited a smoky Chinese internet cafe recently to see the modern "opium dens" of China? The Chinese school system create kids who not only lack creativity, but also leadership and interpersonal skills. More importantly, integrity as a character trait, is no longer possible to be instilled in Chinese kids, in the corrupt Chinese society where the honest and righteous have no chance of survival.

I was enrolled in P.S. 63 in New York City at the age of 10, after finishing fourth grade in a top public Shanghai elementary school in 1982, where I had just finished studying algebra and geometry. If I had continued to study in Shanghai for fifth grade, I would have been studying trigonometry. When I started at P.S.63 I was sent to fourth grade due to my complete lack of English language skills. I was shocked to find that fourth graders at P.S.63 were only studying multiple digit addition and subtraction. It would be in New York city high school before I saw trigonometry.

I have only one comment for the American public school administrators - you are wasting American kids away by setting education achievement goals so low. China is the opposite extreme where academic goals are set inhumanely high so that the society can easily weed out the less "worthy" students due to an extreme lack of educational resources, as a result of a tightly controlled political system. So there is no need to envy China. But please do take a look at the Europeans. The British school system as higher academic levels that seem to produce very smart citizens. The Europeans in general produce smarter citizens than the American system does.