Who's striking out and who's sliding home? 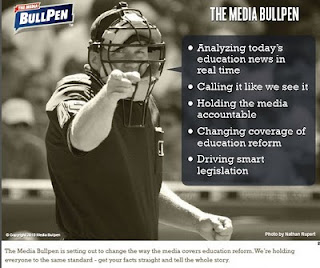 Check out the presentation of the "Media Bullpen", the new project of the pro-charter school organization, Center for Education Reform, funded by Gates, along with the right-wing Bradley and Walton Family Foundations, which will grade reporters and news articles as to whether they accept their pro-privatization, pro-testing spin. 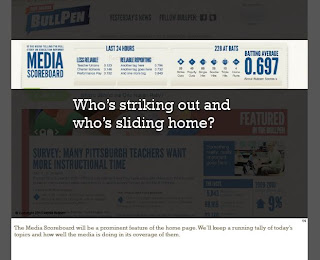 Apparently Gates is not satisfied with buying up most of the DC think tanks, funding fake "parent groups" like Stand for Children, and the new Michelle Rhee organization, Students First, to push for even more damaging policies on the state and national level.


He managed to control several days of coverage by NBC and MSNBC, by co-sponsoring the propaganda extravaganza, Education Nation, and supporting and promoting the film "Waiting for Superman."

But that's not enough. Now he also apparently wants to control all the media's coverage of these issues. 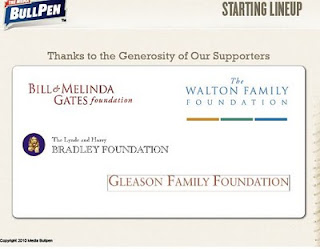 Scary? This is downright frightening.

Worse, it is destructive to what this country is supposedly about.

I don't see why he would even bother - most of the media is gushing unquestioningly about education reform anyway, even without his trying to intimidate them. With some standout exceptions, who are already under fire.

These guys sure have a problem with democratic principles, don't they. Freedom of the press. Democratically elected school boards. Public involvement in public education. --They hate 'em all.

Do insane amounts of wealth necessarily turn a person into a fascist?

Outrageous. Not content to buy Arne, he's going to bully the media.

This is very serious. These foundations threaten the democratic principles our county was founded upon.

Last week I watched The American Ruling Class and The Corporation on Link TV, and couldn't help connecting it all to what's going on in Education. It's time for a documentary like these totally dedicated to the privatizing of public education.

I am feeling more and more like I live in a country that is ruled by Royalty, Royalty by virtue of wealth. Scary, Scary, Scary.

What is frightening is the absence of Michael Mulgrew and his coterie of
$180,000 per year sycophants from this rally.
Mulgrew doesnt really care about school closings. If he did, he would have done more than file a lawsuit over a technicalty and would have turned his writers loose on the real estate deals that Bloomberg is pulling, giving city-owned property to his rich pals. (Koch people went to jail for less). The City Charter is clear: lease or sale or rent of city-owned property must go to the highest bidder after advertisting in the City Record and after an open bid process. I told Mulgrew this in writing and he shrugged it off.
Mulgrew knew before the 2009 mayoral election what Bloomberg was up to and he refused to allow his members a vote on an endorsement because Weingarten told her confidantes in the union that she had an "ironclad" promise from Bloomberg for two, four percent raises.
Looks like the iron melted, just like Mulgrew does when he faces tough choices.
Kids First?
It's a pathetic joke.
-Fired by Mulgrew for trying to organize a union of writers at a union!

This isn't really new. The press has been owned by billionaires for years. But not to despair! The tide is turning. TV news and traditional journalism are dying. The public's information sources have become extremely fragmented and customized by the blogging community and self-publishing. One way to get the word out about what is truly happening is to tell others about my book, "The Education and Deconstruction of Mr. Bloomberg, How the Mayor's Education and Real Estate Development Policies Affected New Yorkers 2002-2009 Inclusive," available at Amazon.com, barnesandnoble.com and borders.com, among other online stores.