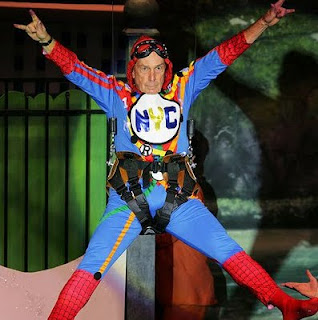 Today, federal prosecutors said that  nearly all the $600 million taxpayers shelled out for the disastrous CityTime project was stolen; and that the fraud goes back to 2003, shortly after Bloomberg's election. (See NYT story)
They concluded that the "corruption on the CityTime project was epic in duration, magnitude and scope," (NBC New York) and that the scandal represents "one of largest frauds ever committed against NYC." (NY1).
Yet here are some quotes from our mayor, even after the scandal started to break:

For all the problems with Citytime, “ it will save us money once it gets going." (Dec 2010).
"We actually dida pretty good job here, in retrospect," the mayor said on his weekly WOR radio show.  (May 27, 2011)
The scandal-plagued CityTime payroll project is now "way ahead of schedule," Mayor Bloomberg boasted Monday. (March 1, 2011)
"CityTime, when you write the history of it down the road, will have saved enormous amounts of money for the city," Bloomberg concluded . (March 1, 2011)
The story of Bloomberg reign: consultants win big & kids lose.  The $600 million stolen in taxpayer funds would pay for the threatened loss of the six thousand teaching positions, nearly twice over.
Shouldn't he have to pay us back?
Posted by Leonie Haimson at 6/20/2011 10:56:00 PM

Yes, he should! He has billions of it, although I guess bringing it up now would not be tasteful. I guess we have to wait a week or 2 since his mother did pass away.

He should pay it all back and resign. If he doesn't resign, NYC needs to show him the door.

I agree with a 'in a quandry'.

All teachers hear is "accountability"!! What about the leaders of our city. The "regular" city public schools are always facing cuts, but the DOE website says "Children First. Always" I guess that is for other children.