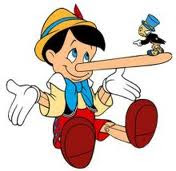 June 5, 2011 (GBN News): In the second such incident within a week, a compromising picture was sent out today to the Twitter followers of a public figure. This time, it involved Bloomberg View columnist Jonathan Alter; but unlike the Anthony Weiner photo, this picture was said to be of Mr. Alter’s nose.

When reached for comment, Mr.Alter insisted that his Twitter account must have been hacked. The nose, he said, could not possibly be his, because it looked to be at least three inches too long.

However, noted forensic otolaryngologist J. Fredrick Runson said that the nose, as pictured on Twitter, has to be that of the columnist. “The altered nose,” he told GBN News, “is definitely Alter’s."

“This could be a case of what we call the ‘Pinnochio Syndrome’,” Dr. Runson went on to say. “One’s words can have consequences for the size of one’s probiscus. I can’t be sure there’s a definite connection, but I’m just saying his nose looked perfectly normal before he wrote that piece last Friday savaging Diane Ravitch.”

If indeed this incident turns out to be a result of questionable journalistic practices, it is unclear what effect, if any, this would have on Mr. Alter’s career. But given that he works for a Bloomberg publication which is "intended to channel [Bloomberg’s] personal philosophy and worldview", a raise and promotion would not be surprising.