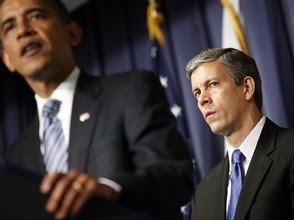 The campaign sees possibilities for gains, for example, around Charlotte, N.C., which is where Mr. Obama chose to hold his party’s nominating convention next year, a decision that aides said signaled how serious they are about competing in North Carolina.

The problem Obama faces is that Charlotte is already a battleground for education policy, with local grassroots group, and Parents Across America affiliate, Mecklenburg ACTS (Area Coming Together for Schools) fighting Arne Duncan-style "reforms" including increased high stakes testing and pay for performance.

The corporate and government leaders who are driving the national movement to transform American education have decided - despite a lack of supporting evidence - that one way to "fix" our education system is to upend the way that teachers are promoted and paid, with a heavy emphasis on how students perform on standardized tests.

Charlotte Mecklenburg Schools is at the forefront of this effort, working in conjunction with the Gates Foundation and the federal government to develop a systemwide pay-for-performance plan. CMS has already spent millions on this system, including almost $2 million to design more than 50 new standardized tests. In next year's budget, which calls for laying off almost 600 teachers, CMS has set aside $2.9 million for pay for performance - money that would save 50 of those jobs.

Duncan drew new criticism this week when he lashed out at Diane Ravitch in a shameless attack piece from Mike Bloomberg's new media operation. The nomination convention should prove only to highlight how the policies of the education secretary, and the man himself, have become anathema to public school parents and teachers.
Posted by Patrick J. Sullivan at 6/05/2011 10:13:00 PM

It's a real shame Duncan isn't emphasizing portfolio or teacher assessments, instead of putting all the pressure on students.