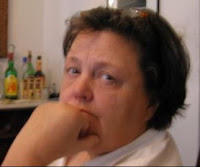 It was 6 o'clock on a Tuesday and there were plenty of police to watch  as the irregular crowed hustled into the auditorium at Prospect Heights High School.  Here were the charter school folks in yellow hats, being herded over to the front left of the auditorium.  Here, on the right side of the auditorium, were the card waving public school parents.  Competing signs read "Stop Privatization" or "My Child has Rights Too".  In the front, seated on the aisle was Hazel Dukes of the NAACP, ready for all comers, amid others wearing yellow coats and hats emblazoned with NAACP.


In the back, pacing and seemingly alone was Eva Moskowitz.  Scattered throughout the  auditorium were various CEC members, camera men and reporters, interested observers from the Comptroller's office, City Council and Borough Presidents offices and others, returning for the expected debacle.  On the side, in the back, under an overhead light was the new guy from Gotham Schools.  Lindsey Christ from NY 1, ran up and down the aisles in a bright yellow dress.  Another night in NYC at yet another PEP meeting.

From my point of view, the PEP members weren't in any rush to get on the stage.  In fact the meeting started late.  It was closer to 6:20 when the panel began to sit.  Hours later, I would understand their reluctance to begin the long night.  No matter how well padded  you are, and I am, it hurts to sit for that long.  As the role call began, various members of the DOE staff took their seats and then the Chancellor descended from the stage to talk in the well of the auditorium. He had a little mike trouble but overcame that quickly.  He gave his report with high lights about the new date for the start of the school year in September and a few remarks about the positive affects of seeing so many graduations and being so proud of the schools he is working for every day in this great honor of the Chancellor-ship.

A questioner on the PEP [Patrick Sullivan] asked about the recent CEC elections and inquired about new run offs.  The Chancellor deferred to Ms Hall, who gave an answer..I think.  It was hard to hear her over the snickers and snorts of audience and it had been announced that she did have laryngitis.  But, it is my understanding that there will be run offs on Tuesday and Wednesday June 28 and 29 and results will be announced on or before Friday, July 1, the date the CECs officially take office.

On we went to the reading of the proposed co-locations.  It seemed to be a chore for Best; he seemed bored and exasperated by the long and detailed list of schools.  Then the floor was opened up to comments.  Speakers were directed to one of two mikes on the floor, one with green tape and one with yellow tape around the stem, and called up by number.  The first speaker began the evening by asking why these co-locations were being re-introduced when there had already been votes.  Didn't that violate the law?  Others got up and protested the co-locations, decrying the squeeze on the public schools.  Parents and teachers and CEC members  were passionate in their dismay at the number and type of co-locations.  Schools were loosing libraries and play-yards.  A few, such as the co-location of P 188 m and Girls Prep, were praised for the work put in by the entire community surrounding the school.  It was, for a while, a crowd without controversy.
Then came  Hurricane Hazel.  As the honored representative of the NAACP and a member of the law suit opposing the co-locations proposed, she was adamant that the issue was equality in education for all students, not some, not the 4% of students who attend charter schools but the 96% of students who attend the other, forgotten, public schools.  We were to educate all children, not some of the children.  The place erupted. ...with applause and with cat calls.  In the back of the auditorium, someone started  yelling at Hazel and there was a brief moment of hustle, bustle and confusion.

As the evening wore on, more and more people were asking the PEP to vote NO on these proposals.  Students from one alternative school were eloquent in their requests to keep the school untouched by charter school controversy.  A principal of another school asked why her school had been chosen when a year ago they were denied the right to expand because there was no room....and by the very same Office of Portfolio Development

A few folks from charters got up and talked about the NAACP again.  Hazel tracked them down to the back of the auditorium.  Eva, in the meantime, had disappeared from sight.  Police came into the audience and threatened to remove one young man who had called out.  All of sudden, the Chancellor called for a 5 minute break.  Folks drifted around the auditorium and eventually out the doors.  Many never came back and the crowd was noticeably thinner.

Having been at other co-location hearings, the night was beginning to seem odd to me.  At 9:20 PM there were, as yet, no rush of pro-charter school parents or staff at the mikes.  One CEC member had accused the UFT of manipulation in the lawsuit against charters.  Another person had supported the proposals, but this was totally unlike any other charter/public school location hearing I had ever been to before.  Then, at close to 9:30, three hours into the meeting, I realized what was happening.   All of a sudden parents from the charter schools began to appear at the mikes.  The strategy became oh so clear:  talk last and leave the PEP with the sounds of  support for co-locations ringing in their ears.  But a few of the more resilient public school supporters also realized the strategy and began to speak out at the mikes.

Once the PEP members reappeared on the stage, more speakers were called to the mikes.  Some speakers had their mikes cut off at two minutes, no matter where they were in their comments.  There were a few tense moments when a parent from one of the charters starting yelling..."How dare you? How dare you?"  She called out a few times but her objections were drowned in cat calls.  Finally, after six hours the vote was called.  But, wait, there were questions from the panel members.  An exasperated sigh from  the Chair of the meeting was heard by all.
He grumpily permitted questions: why are you crowding out the library in one school?  why can't another expand to 8th grade if there is room for a charter school?  why are we voting on amended proposals when they were in violation of the time lines set by law?  Mark Sternberg, Deputy Chancellor for Portfolio Planning , 6th grade teacher for three years and principal of a high school for one year, thought every question was a good question, but never  gave a good answer.  He rambled, he quoted regs, he obfuscated and then he wanted to talk off line (what is it with these catch phrases:  let's talk off line, what's the ask? beginning any answer with So...)

The vote proceeded: 8 for, 4 against; 8 for, 2 against, 2 abstentions; 8 for, 4 against; 8 for, 2 against, 2 abstentions....monotony began to set in, some folks began to yell Puppet!  Puppet!....and then Michael Best announced, in a tired but triumphant voice, the resolutions pass.  It was anticlimactic.It was also late, my backside was sore, my legs were trembly, my head hurt.  Had I developed diabetes while I was there?
Then I realized that they were about to discuss the budget and play the power point.  I never left any place so fast!

Sternberg is horrible. Why anyone would let him speak for their organization is beyond me. He can't even dress up a non-answer like it's an answer. I would never let him represent my policy. his total outlook is "I'm right, it doesn't matter what you think" -- but he is unable to HIDE it.

Why bother to hold these meeting? It is very clear that decisions are made in advance. Nobody cares about the children in our public schools,nor their parents. Charter schools should be forced to absorb the children of the schools that are closed or overcrowded. Charter school should be forced to accept special ed and bilingual students at the percentage our public school do.
At a time when budgets are being cut,class size being increased,teaching positions being lost and not replaced,how can we add charter schools to buildings that are already overcrowded?
The educational mayor and his puppets are killing our schools.rinedro

All this stuff is important,but secondarily to teaching kids to read, no matter the structure of the school. ESSENTIAL change is needed.

Ellen -- You always have an amusing way to tell a story. Hope you do more reporting for this blog.