Diane Ravitch has written a superb critique of Waiting for Superman in the NY Review of Books that is already being hailed as damaging this film's prospects for an Oscar. 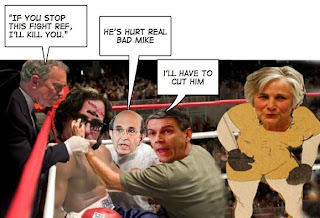 Also check out the review by Shino Tanikawa in this week's Villager, and my take on the film's biases in the Huffington Post called The Blind Side, and what scenes an anti-Superman film would look like.

The best analysis of the money behind the film and the charter school movement in general, and how its hedge fund supporters are making millions off charter school endowments, is provided by Barbara Miner of Rethinking Schools on the "Not Waiting for Superman" Facebook page.

And this video, called the Inconvenient Truth behind Waiting for Superman, made by the people at GEM, with parents and teachers expressing their point of view.

No wonder NYC public school parents are so annoyed by the continual exhorting of DOE educrats to go see the movie, including repeated offers of free tickets.

As Diane Ravitch commented rather ironically on the NYC Education list serv,

"This is odd. Why is the NYC Department of Education promoting a film that claims the public schools managed by DOE are failures and children must flee DOE schools to enroll in a charter? I don't understand."