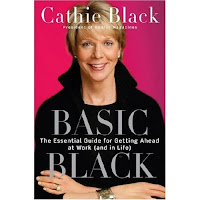 So much was made in the 2008 Presidential election cycle about Barack Obama’s two memoirs, how they spoke for who he was, where he came from (philosophically speaking), and what he believed. Many Americans used those books in part to assess Mr. Obama’s character and suitability for the nation’s highest office.

Cathleen Black has left a memoir-style book by which her character and intellectual heft might be judged as well: Basic Black: The Essential Guide for Getting Ahead at Work (and in Life). It was first published in 2007 and blurbed on Amazon by (among others) Donna Karan, Meg Whitman, and Gayle King (friend of Oprah). Perhaps it can stand as a measure of her fitness for the NYC schools chancellorship.

I haven’t read the book -- nor do I plan to -- but here are some telling excerpts (one block paragraph for each) from reader reviews posted on Amazon that suggest some rather troubling themes. Judge for yourself whether Ms. Black sounds like the person we want leading NYC's public schools.

As far as it being a "guide to getting ahead at work and in life"...what a joke!! The whole book talks about how Cathie basically "stuck it to the man" and then she has the audacity to right a 3 page "about the author" at the back of the book. When I got to this section I thought...what more is there to know about you...you rambled on about your life for nearly 300 pages! Good for Cathie that she worked hard to get where she was, but only about 10 pages of this book were valuable to help anyone else do the same. The basis of the book goes like this: "here's a rule i live by...now let me tell you a story about me...now let me remind you how this story relates to this rule" I've been wanting to read this book for a few years now, and I should have just kept waiting.”

I didn't think any part of this book was essential at all. The advice she gives like 'take risks' and 'don't give up' - that's all common sense stuff. I found this book bragged more about herself than anything. In fact, she seems very self-absorb and even shallow at times, her stories are all about her brilliance and not about helping others get ahead as the title suggests. She doesn't relate to the reader.

To the average career person, hearing about how tough she had it trying to decide which high profile job to take over another high profile job, made it difficult to really identify with her. The story was not rags to riches, but rather riches to riches.

Unfortunately, she listened to her agent and "PR guru" -- the two women credited as having convinced her to write Basic Black -- and played her cards way too soon, cashing in with a fluffy collection of skin-deep anecdotes and common sense career advice ostensibly targeted to female, twenty-something "recently minted MBAs" but more appropriate for a Freshman college course on business management. Oddly, the book's most disappointing shortcoming is Black's surprising (perhaps self-serving?) acceptance and repetition of stereotypes about women as the weaker sex.

Ms. Black's "words of wisdom" are nothing more than basic common sense tidbits for the work world….I read page after page of mediocre advice. I was also turned off by Ms. Black's tendency to name drop and pat herself on the back over and over again. I agree that with some other readers that this is really a memoir masquerading as how-to advice. There's nothing special about Ms. Black's advice. In fact, I was shocked that someone who has climbed to the top of an extremely competitive industry had so little to say.

Some of Black's anecdotes about her rise to the top were memorable -- most notably the one in which she very publicly gives one of her superiors a giant tomato from her garden, in order to make an impression on him. But Black doesn't succeed in turning the anecdote into a lesson. It's just a story about a stunt she pulled to publicize herself -- and in the telling, it comes off as a lame stunt at that. (She also kept referring to the tomato as a "vegetable," which drove me nuts.) Oddly enough, a few chapters later, she talks about a hopeful interviewee who sent her a four-foot-tall potted plant as a thank-you gift. Black makes fun of the gift and advises against readers doing something similar. I don't get it. Why is it clever for Black to go to a big meeting and give somebody a giant tomato, but it's stupid for a potential new hire to send Black a large plant? Basic Black is full of muddles like this….But there is very little actual "advice" in this book, so don't be fooled by the subtitle, or by a quick flip-through -- those little red-boxed bits of "advice" peppered through the text were more like lame fortune-cookie fortunes, empty aphorisms.

Cathie Black's book is black and white: an over-drive of ego. Her stories center around her brilliance. She comes off as self-obsorbed and shallow….Don't tell me to be driven and take risks. I do that every day. Don't bore me with your love story with yourself. Surely she could do more for women than canned testimonials and naming a book afer herself.

…[Halfway through, I'm tired of her bragging about her success and trying to find lessons in her anecdotes. All her "tips" are basically common sense. I agree with the review that says it's a "memoir masquerading as a guide to career and life....which mainly consists of anecdotes from her working life and fawning praise for Al Neuharth."

As a mid-30s professional expecting my first child in spring, I had high hopes this book might offer some valuable insights into the realistic management of expectations when it comes to juggling career and family life. The book had interesting stories through about the first 1/2, but then became redundant and the theme began to grate on me (basically: workaholism at any cost, all else be darned)….Turns out she hired a full-time nanny after FOUR weeks maternity leave and subsequently delegated (by her own admission) the majority of the child-rearing responsibility to her much adored mother-in-law. She makes no apologies for putting her professional aspirations above all else, so at least she is honest about it. Where was the 360 degree balance? Is the REAL answer she was proposing to hire a nanny and have your mother-in-law on 24-hour call?? Surely there had to be more? Unfortunately, there was not.

I finished the book disappointed that the time invested in what could have been an opportunity to learn from a successful professional/ wife/ mother turned out to be nothing more than a the story of a woman who made it big.... simply by behaving LIKE A MAN.