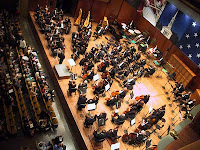 In an interview with GBN News gossip columnist Cindy Runson, Ms. Black revealed that she had recently applied for the job, only to find that current conductor Alan Gilbert’s contract does not run out for a number of years. “It was a big disappointment,” she said. “I mean, Gilbert knows music and all, but it takes an experienced manager to get productivity out of a bunch of musicians.”

Mayor Bloomberg bristled at critics who charged that the Chancellor’s position will now be seen as merely a consolation prize to a crony. “She’s just as qualified to run a school system as to conduct the Philharmonic,” Mr. Bloomberg told reporters at City Hall. “It’s the same skill set. You just have to deal with interest groups instead of instruments.”

The problems with school jobs and new york school construction is that often the priorities aren't straight. Too much money is wasted, even though a budget is tight. In order to make sure this doesn't happen, the most important step is to research the options using a site like McGraw Hill's New York Construction Site. They help make is easier to get on the right track because they offer a lot of information on the materials, manufacturers, and companies that are available. While I do work with them, I have honestly used them myself because they have been a big help. I particularly find their CAD details to be useful. You should check them out.