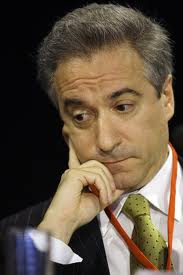 There was wide coverage this weekend and today of the unethical stacking of Commissioner David Steiner's waiver advisory panel with people deeply connected to Mayor Bloomberg. The panel was convened by Steiner to determine if job requirements should be waived for chancellor candidate Cathie Black.

Beyond the three individuals who formerly held senior posts in Bloomberg's DOE, the Times revealed deeply troubling and undisclosed conflicts of interest held by Louise Mirrer:

Anyone who attended the Monday afternoon Upper East Side event, attended by the media, during which 12,000 (Twelve Thousand) signatures were delivered to Commissioner Steiner's private residence on East 87 th Street, will not forget the deep rooted emotions expressed by the speakers any time soon.

The total awareness of all present that the so-called "Waiver Panel" is nothing more or less than a sham, was a fact that hung over the crowd like an ugly cloud.

Yet speaker after speaker stood up to the plate to speak about Michael Bloomberg's latest stunt that is now the talk of the town.

This Mayor's level of Hubris knows no bounds.

Hopefully, Cian Traynor of THE FINANCIAL TIMES of London, on the other side of the Atlantic Ocean, will take an interest in this latest outrage committed by a Mayor whose disdain for transparent government has made a mockery of the concept of Democratic rule in New York City.

It was Mr. Traynor of THE FINANCIAL TIMES of London who saw fit to run a full page story about my own seven year "David versus Goliath" battle with Bloomberg and Klein's NYC Dept of Education after I suffered egregious and unrelenting retaliation for becoming a Whistle-blower of the massive corruption within the school system.

As a 37 year veteran Educator and former "Teacher of the Year", decorated personally by Mayor Rudy Giuliani, in a City Hall ceremony, I had insider information, that the NYC Dept of Ed preferred not be made public.

This is all working itself through NY State Supreme Court and Joel Klein will be called to testify.

What those who spoke and those who listened today should now reflect on is not just the charade of the "Waiver Panel" but what will be the next step to fix the situation for one million school children after the "big fix" becomes a "fait accompli".

Remember the English Nanny who was accused and convicted of being responsible for the death of a NYC infant in her care. She was already on her way to prison with a decades long sentence. It seemed that her luck had run out and she and her lawyers had no more options.

Suddenly the people of Great Britain rose up as one and said in the cry heard round the world:

"No way you will lay this type of pain and punishment on a Daughter of England".

And Wham-Bam-Shala-Kazam, that young convicted Nanny was out of jail and on her way back to England faster than a speeding bullet.

That is what you call People Power.

It is what you do when the Laws and Courts of the land fail you.

People Power starts where the Laws on the books leave off or when no one has the guts to say to a "Legend in his own Mind", Mayor for Life:

Just who do you think you are-bud??

When one million New York City parents stand up together to defend their one Million Public School children and say in one loud, clear resounding voice, that will be heard from here to the offices of THE FINANCIAL TIMES of London:

"No way will we permit you "Masters of the Universe" to visit the pain and punishment of the likes of the uncredentialed Cathie Black on our Sons and Daughters".

Been there- done that. Not again.

If this has to come to push and shove, I would venture to say one million parents can shove pretty hard- if forced to.

Especially when it is their children being put in harm's way.

If there was ever such a thing as the concept of a "Tipping Point", then by all that is Holy, this issue of our children's futures, is that Tipping Point.

We WILL fix this problem. If there is a God in Heaven, we will fix this piece of blaspheme, let the Heavens fall.

Our children are not for sale.