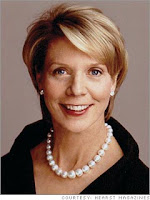 The timing may just be coincidental, and the interrelationships may be just as coincidental, but it is difficult to ignore their convergence. Is it possible that Mayor Bloomberg, or perhaps Joel Klein himself, engineered a recent appointment of Cathleen Black to the National Leadership Board of Harlem Village Academy's (HVA's) charter school network in order to strengthen her otherwise nonexistent education experience in advance of naming her as Joel Klein's prospective successor?

Consider first that Ms. Black's prior education credentials, as now being reported in the New York Times, appear to consist of having once attended a mentor day with Michelle Obama at a Detroit school, and having once been the figurehead "principal for a day" at a Bronx school. Add to this the fact that she just joined the HVA National Leadership Board "a few months ago" and has yet to actually attend any meetings. Throw on top of that the information that the co-chair of this advisory board (along with singer John Legend) is Rupert Murdoch, a multi-million-dollar contributor to HVA, and top it all off with the announcement that Joel Klein is taking an education industry, strategy-related position at Murdoch's News Corporation.

Considering the somewhat greasy incestuousness of it all, combined with Mayor Bloomberg's penchant for "keeping it all in the multi-millionaire, corporate business family," and it seems not beyond the realm of possibility that Ms. Black was added for reasons other than the board's pressing needs. After all, that HVA board beyond Murdoch and Legend already featured the likes of Barry Diller, Jack Welch, Bill Cosby, Charles Bronfman, Tiki Barber, Richard Parsons, and Steve Forbes. How many more billionaires and public figures did they really need, yet suddenly a relative unknown (outside the magazine and news publishing business) is appended to a board whose membership is rather more illustrious than Ms. Black.

In anticipation of naming Ms. Black as his choice for NYC Schools Chancellor and recognizing the glaring paucity of education-related experience on an otherwise fine resume, could it be that Rupert Murdoch or someone else on the Board, or perhaps Ms. Kenney herself (whose professional closeness, along with that of Eva Moskowitz, to Joel Klein is hardly a secret), was approached for a favor, to help establish a modest bit of education credibility for Ms. Black?

This writer is not given to conspiracy theories in general, but the timing and interconnectedness of it all, added to Mayor Bloomberg's disturbing secrecy in acting seemingly entirely on his own, to fill a VERY public position, certainly generates some interesting questions and intriguing possibilities. Then again, maybe it's all just the product of some unfathomable cosmic karma.
Posted by Steve Koss at 11/10/2010 11:56:00 PM

The timing of it all surely makes one wonder...good piece, Steve

It is crunch time in New York City.

If "Bloomberg Inc." is allowed to get away with this one, God help us,
we may all just as well throw in the towel.

Bloomberg knows very well how to time certain decisions to his benefit. He timed the overturning of term limits where the public could not fight him. On the 11/2election ballots option 1 where the public had to vote on restoring term limits but not on the incumbents, and now this new chancellor that was preened several months ago by placing her on the board of a charter school, which she is yet to show her presence. This sounds to me that Bloomberg is up to no good again and he's using distraction so no one will know his dastardly plan.

Will Klein and the one-year rule for DOE business apply...or will there be a waiver for that too?

So...are we to assume Murdoch is looking towards the Washington Post/Kaplan model of solvency?

And how are Merriam-Webster's financials these days? Or Houghton Mifflin's? Takeover targets? Dictionary wars?

You are describing White Chalk Crime. White Chalk Crime is no coincidence. It is organized, covert crime taking place within our schools that provide automatic money that White Chalk Criminals have redirected for their own gains. It is mafia-like. It IS conspiratorial. It takes place below the radar and is carefully hidden with the use of tax subsidized funds. It is why our schools are failing. Learn all about it at WhiteChalkCrime.com.

 DID YOU KNOW THAT THE NEW CHANCELLOR OF NYC SCHOOLS, PUBLIC AND CHARTER, IS KATHLEEN BLACK, A CURRENT AND LONG TIME MEMBER OF THE COUNCIL ON FOREIGN RELATIONS?
 DID YOU KNOW THAT REGIONAL KILLER BOYDEN GRAY AND NYC MAYOR BLOOMBERG ARE ALL MEMBERS ON THE COUNCIL ON FOREIGN RELATIONS?
 DO YOU KNOW WHAT THE COUNCIL ON FOREIGN RELATIONS HAS A HISTORY OF?
 PLEASE FORWARD THE BELOW DOCUMENT TO PARENTS, TEACHERS, ADMINISTRATORS, HUMAN RIGHTS OFFICES, AUTHORITIES, DOCTORS AND LAWYERS.
SUMMARY:
http://www.examiner.com/esl-in-new-york/council-on-foreign-relations-members-michael-bloomberg-and-kathleen-black-rule-n
AND
http://www.free-press-release.com/news-the-new-chancellor-of-nyc-schools-is-cathleen-black-a-member-of-the-council-on-foreign-relations-1289488854.html