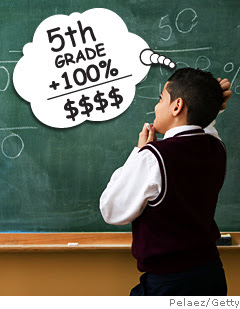 In his Daily News column on Thursday, broke the story about the proposal to give cash awards to students in the empowerment schools who ace the new interim assessments. (Here is an earlier blog entry about these $30 million assessments to be given four to five times a year.)

More than a week ago, we posted a letter to principals from Roland Fryer, the 30 year old Harvard professor leading the project.

Students will be paid five to ten dollars for taking these tests -- and 25 to 50 dollars if they score a perfect score. Every empowerment school that buys into the project will also be awarded a $5,000 cash "gift."

This proposal severely undermines the official DOE claim that these are “no-stakes tests” See this headline on the press release from June 1 for example: "Customizable, No-Stakes Assessments to Give Teachers, Principals, and Parents Timely Feedback on Student Progress"

The new project was inspired by the Mayor’s poverty initiative.Bloomberg established a commission on eradicating poverty, and then ignored most of their recommendations and instead announced he would implement experiments to pay parents and students cash if they attend school regularly and get good results.

Of course, if the kids who score well are not poor, they will presumably get receive these awards anyway – so this proposal might even enhance economic disparities among students at the school level.

In the NY Times today, Ernest Logan, the president of the principals’ union, said that “We are troubled by additional pressure being placed on children to achieve perfection,” he said. “What really matters in education is continued student progress, not perfect test scores.”

Apparently, the project has not been formally approved by DOE, despite the fact that the Fryer has already held sessions with principals and signed up a number of schools. Eric Nadelstern, head of the empowerment zone, endorses the project, according to the NY Times:

“He has my enthusiastic support,” Mr. Nadelstern said in an email to principals.“I encourage you to give the program serious consideration.”

Bloomberg also likes the proposal: "If we aren't looking at everything, shame on us,” he said at a news conference yesterday, “I hope there are people thinking about how we would implement that and every other idea." (Unfortunately, they still aren’t thinking seriously about how to reduce class size – despite a new state law that requires them to do so.)

According to NY1, late Friday DOE issued a statement: "Performance-based incentives are one element in a range of strategies we are considering. We are still at a preliminary stage in considering how to implement such a program."

Does this reluctance to endorse the project signal a split within the administration?

Check the negative commentary from New York magazine, in a piece entitled "Mike Bloomberg wants to bribe your kids," the blog Ed in the Apple, and a column criticizing a similar program of cash incentives in here:

“Gov. Charlie Crist was correct when, as the state's education commissioner, he said that the prospect of cash rewards for students who score well on FCAT made him “a little queasy.”

We spend loads of time and effort telling kids what's right about learning, that education is something inherently good and valuable. By using cash as an incentive for students to do well on state tests, schools act hypocritically, and they may even be undermining their core missions.”