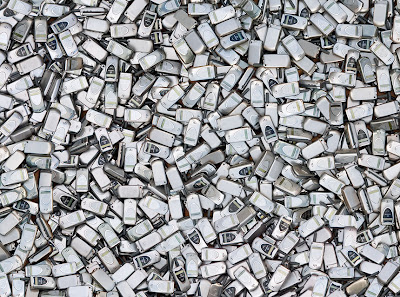 June 12, 2007 (Gadfly News) Mayor Michael R. Bloomberg announced this afternoon that the city would build a new warehouse in which to store all the cell phones recently confiscated from New York City public school students. The mayor, flanked by Schools Chancellor Joel I. Klein and Police Commissioner Raymond W. Kelly, made the announcement in an warehouse that is currently being used to house other items confiscated by the city, principally bicycles impounded during the Critical Mass bicycle rides that gather monthly in Union Square.

“As you can see,” said Mayor Bloomberg, “housing all our confiscated items has become a problem for us, with the bicycles and the cell phones having to share space. But we’re determined to address the overcrowding.”

As the mayor was speaking, another shipment of cell phones arrived in the warehouse. Many of the phones were ringing, and the cacophony of different ring tones nearly drowned out the press conference. Mayor Bloomberg shook a playful fist at the phones, then plucked one at random out of the crate. He glanced at the caller I.D., then said with a wink, “It says it’s ‘Mom’ calling.” For the benefit of the assembled reporters he flipped open the phone and affected a juvenile voice as he answered it. “Hi, Mom…Yeah, I left school already … No, I haven’t got to my piano lesson yet… Wait! Some big scary man is following me!... Oh no! He’s dragging me into his car… Mom! Help! I…” The mayor then flipped shut the phone and high-fived Chancellor Klein. “I guess I got that mom’s knickers in a twist, now didn’t I?” he said.

Returning to the subject of the new warehouse, the mayor explained that it would be built on the site of P.S. 234 in lower Manhattan. “That will put it close to Tweed,” he said, “so we can keep an eye on the inventory.” The mayor acknowledged that the warehouse would displace P.S. 234, but insisted that that would not be a problem. “We’ve identified a brownfield site where the school can eventually relocate,” he said.

Mayor Bloomberg deflected any questions about whether the closing of the elementary school would add to the severe overcrowding already plaguing District 2. “I’m really tired of this issue coming up,” he said. “People are going to have to just trust me on this. In this case, the warehouse is just going to have to take precedence. I think that when you look closely at our facilities and how they’re being used, you’ll see that the vast majority of our school buildings are being used to house schools, so the balance is still tipped in their favor.”

Addressing the issue of how the new warehouse would be funded, the mayor pointed to the increase in state funding the city is promised “because of the decision in our favor on the Campaign for Fiscal Equity case. We’ve earmarked some of those funds to build the warehouse.” But the mayor was interrupted by Chancellor Klein, who tapped him on the shoulder and whispered discreetly in his ear.

“I stand corrected,” said Mayor Bloomberg. “Joel here tells me that the CFE funds are already committed to our McGraw-Hill testing contracts. No worries. I’m sure we can tap some of our Homeland Security money. Right, Ray?”

Asked what would eventually happen to all the cell phones confiscated by the city, the mayor noted that that was a bright spot in the plan. “We’ve looking into an unusual public/private partnership,” he said. “And by ‘private,’ I mean private schools. A lot of our city’s independent schools have community involvement programs in place, so we’re going to turn the phones over to them and I trust they’ll find some charitable use for them. Luckily, we developed a good relationship with many of the private schools already, after granting them preferential use of the refurbished playing fields on Randall’s Island. And,” he concluded with a wink, “Chancellor Klein and I both have relationships with the private schools that go back further than that, don’t we, Joel? All those whopping checks we wrote out over the years, for tuition and more?” The mayor draped his arm around the chancellor. "Don’t forget – the two of us are private school parents.”
Posted by Jan Carr at 6/12/2007 08:46:00 PM

I was going to remark that the Mayor failed to note in his announcement that all those cell phone confiscations were surely responsible for the dramatic increase in test scores, and would thus justify any expense for the warehouse. But then I realized that I'd probably be giving him ideas. Hmm ... maybe I can get that PR job after all!