Here's an excerpt from a letter to Chancellor Klein from John Elfrank-Dana, teacher and chapter leader at the in lower :

I was in "shock and awe" at our last school budget meeting. We are held harmless for over $200,000.00 and are expecting increased austerity for the next two years - all of this in a post-CFE world? It's hard to believe that we are not feeling any of the trickle-down from the CFE money. We need smaller class sizes for our freshman and advisories as a fifth (not sixth) class. Mr. Klein, we want to succeed and demand a chance to do so. ....Can you explain where our share of the CFE money is going, and when we will feel it at the school level?

Murry Bergtraum is a severely overcrowded high school that has been on the state failing list for several years. In fact, it is in its second year of "restructuring"-- with the possibility of closing in the near future if results don't improve. Class sizes range from 28 to 30.4 students-- far higher than the rest of the state, where high schools average twenty students per class.

Yet according to the "fair student funding" reform that DOE claimed would drive more dollars to our neediest schools, Bergtraum's budget would have been cut by $282,365 next year if the proposal had been fully enacted. Because of the negotiated agreement to "hold harmless" all schools, it will receive a big fat zero through this formula for the next two years instead.

Compare this to Stuyvesant high school, with the highest graduation rate and the top performing students in the city, due to receive an increase of $68,929 next year through its FSF allocation.

In fact, 47% of all the failing schools in NYC would have received cuts averaging $322,000 if the proposal had been implemented as originally designed -- and will get no extra funding through the formula for the next two years. The other 53% failing schools will get an average of only $81,676, enough to pay for one extra teacher at most.

What makes this particularly disturbing is that so far, the FSF allocation is the only way in which DOE has announced it will distribute any of the extra funds resulting from the settlement of the Campaign for Fiscal Equity lawsuit to schools, a case which was more than 13 years in the courts and was finally settled by the State Legislature this spring. 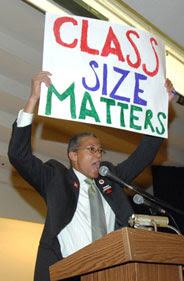 Councilmember Robert Jackson (see photo to the right) was the original plaintiff in this lawsuit -- in which the state's highest court concluded that class sizes were too large in NYC schools to provide our students with their constitutional right to an adequate education.

The so-called "fair student funding" allocation is also the only way in which so far Chancellor Klein has publicly revealed that he will attempt to comply with the new state law requiring class size reduction -- by simply aggregating the individual choices of principals who choose to use their FSF funds to hire extra teachers to reduce class size. The city is supposed to submit a five year class size reduction plan on July 1 -- with the first year focused on low-performing, overcrowded schools -- a description that fits Murry Bergtraum to a T.

From all the evidence so far, the administration's class size reduction plan -- as well as the FSF formula itself--is a fraud.

For more on how the city's FSF plan fails our failing schools, see this memo here.

For how it fails to be an actual class size reduction plan, see the Class Size Matters letter to the Regents and the State Education Department.

Sounds like you're coming from the "throw money at the problem" school of public policy, which doesn't have a stellar history, especially in education. My guess is that the budgets of "failing" schools have risen substantially over the past few years. I bet you'll also find that despite those increases, most of the schools haven't improved much. Money clearly isn't the answer to the problems those schools are facing, especially when you consider that many schools with similar populations have been achieving much better results for kids with less money (one of the things fair student funding highlights, I think).

Tell me, exactly what NYC schools have the same population as Bergtraum, with large numbers of special ed and ELL students, who have been largely excluded from the new small schools established under this administration, as well as a similar level of extreme overcrowding and huge class sizes, and yet are so doing much better?

The entire premise of fair student funding, as well as the CFE case, is that money matters. If it doesn't, why bother to reform the funding system?

So who's fault is it that nearly 400 schools are now on the failing list in NYC? The individual failings of the principals and the teachers at each of these schools? Or the management at the DOE, which simply doesn't know how to improve our schools in the systematic fashion that is clearly necessary?

What happened to accountability?

I'm a little tired of your comments, anonymous. If you actually believe what you say, why don't you tell us who you are? Accountability matters in this matter as well. It time to take responsibility, and own up to your opinions.

Actually, the funny thing about our schools is that nobody has tried throwing money at the problems in our childrens' classrooms.

Special needs kids, for one example, rarely get the services they need. Occupational therapists are deployed to cover absent teachers, have no fixed therapy rooms; while the children who need them get no therapy. A little money thrown that way might help.

Once again, let me just state the obvious. Of course money matters, for over 15 years at every legislative breakfast our Pres Council held and our Community School Board held, the question was asked when will the formula be corrected to keep NYC from being shortchanged year after year. I sat in committees with our Superintendent and all the Principals and PA Pres deciding what we had to cut over the summer because of budget cuts. Did we take away librarians, or foreign language, or art? But now we seem to have the money or some of it and all I see are tests and assessments, etc. and the failing schools are still failing. It is not because the kids can't learn, or the teachers can't teach. I am not an educator, but common sense tells me that if there is a process that has turned around one failing school, than bring that process into the arena where it can help other failing schools. And nothing increases a schools chances better than involving the Parents on every level from the classroom to the policy decision making. What I am almost positive won't help is more high paid staff at tweed, and the burgioning number of employees in the system, and definitely not paying parents and kids to take responsibility for success. What message are we sending here.

I can tell you that my kid has no more than 19 other students in her classroom, and often has less. She has had consistently excellent teachers, with no exceptions. Every room she's been in since kindergarten has had multiple computers in it, all used one way or another for instruction.

She's been in older buildings, but they've always been well-maintained and clean.

Sometimes I feel fortunate in having been priced out of the district in which I work long ago. Of course my home taxes are at least triple what they'd be if my house were in NYC.

But I know exactly what I'm paying for, and I vote for that school budget each year. There's no reason we couldn't do the same in NYC.