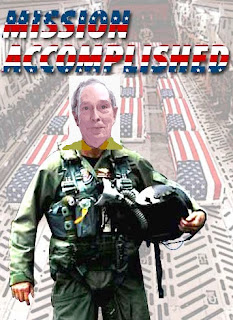 June 14, 2007 (GBN News): In a speech given on the steps of a warehouse storing thousands of confiscated cell phones, a camouflage clad Mayor Bloomberg declared victory today and announced that “major combat operations against cell phones have ended”. Making a direct connection between confiscation of cell phones and the recent city gains in standardized math test scores, the Mayor spoke to a gathering of school security officers and their director, former Tajik President Emomali Rakhmon. “Because of you, our schools are now secure”, the Mayor told them, “and we have beaten the rest of New York state in Math scores. We were able to accomplish this because unlike elsewhere in the state, our students don’t have parents interrupting their tests with silly questions about what they want for dinner.”

The Mayor, after a dramatic parachute landing on the roof of the warehouse, admitted that skirmishes do continue, and that there are a few pockets of cell phone resistance in some of the city schools. Mr. Bloomberg said that he has directed his security chief to sweep those schools immediately to clear out the renegades. Mr. Rakhmon, speaking through an interpreter, unveiled a new security plan under which students will be searched by his forces for cell phones before every test, and armed officers will replace teachers as proctors to insure continued compliance. “We will not have our students distracted”, he said, “even if we have to drag them away in handcuffs.”

“Wait till you see our test scores next year”, Mr. Bloomberg predicted. “When we get the rest of those yackity-yackers out of the schools, we’ll beat the whole country’s scores. And there will be so few kids left, even those whiners who keep asking for smaller classes should be happy.”

In other news, Schools Chancellor Joel Klein was hospitalized today for psychiatric observation after one of his statements caused aides to question his mental status. Mr. Klein had just named Marcia V. Lyles, former Region 8 Superintendent, as Deputy Chancellor for Teaching and Learning, an appointment which surprised some observers because the test scores in her region had not risen as much as in some others. Mr. Klein was quoted as saying that test scores alone were not the basis for his decision to appoint her, a statement which one aide called so uncharacteristic as to raise concern that “He could not possibly be in his right mind.” Moreover, the fact that the appointment drew praise from both the principals’ and teachers’ unions raised further concerns as to whether Mr. Klein was sane at the time he made the appointment.
Posted by Gary Babad at 6/14/2007 05:20:00 PM