Diane Ravitch: Another Look at the 2007 ELA scores

Jonathan posted a good question in his comment. He said that he was more interested in the year-to-year changes of the same cohort (value-added), 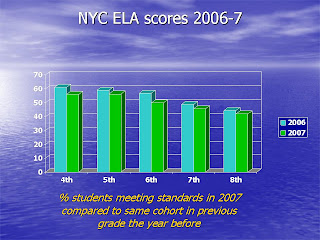 This is not difficult to do, and the annual testing of students in grades 3-8, which started in 2006 in response to the requirements of NCLB, makes it feasible to compare the performance of the same cohort of students as they advance through the grades.

The data also permit us to look at the eighth grade cohort longitudinally. 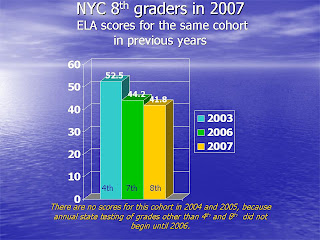 Considering the score changes from the perspective of "value-added," the steady decline in test scores is even more alarming than the comparison of grade-to-grade, because there are no gains at all.

These year-to-year comparisons for the same grades suggest that progress has been sluggish at best. After five years of mayoral control and four years of the Children First "reforms," test scores decline steadily for each cohort.

Now the Chancellor promises to add new tests, with the expectation that more testing means more learning. This is not good news. Testing is not a substitute for a sound curriculum and effective instruction.

Now the question becomes, are we seeing teaching/curriculum reflected in these scores, or are we seeing differences in the tests themselves?

This article is a joke. I don't know how Diane Ravitch can praise Crew and Levy now that we know that they raised ELA scores by exempting hundreds of thousands of English Language Learners from taking the test. I wonder how their results would have looked if those students were made to take the tests. Sounds like she's got an axe to grind. At least NCLB now forces all schools to come clean in terms of exempting certain students from the test.

Ravitch's op-ed also criticized Klein for not making "dramatic" increases in test results. Shouldn't she know better? Places like Houston Schools with Rod Paige and NEST+M show us that huge increases in a short period of time on standardized tests can only mean one thing: cheating.

This op-ed is intellectually flimsy and not worth the paper it is written on.