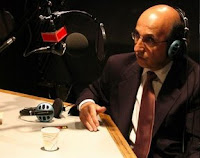 GBN: Chancellor Klein, thank you for speaking with us today. I understand that you have another new initiative to announce.

JK: Yes, I’m sure that our parents and schoolchildren will be as excited as I am about this. The Department of Education will now be partnering with the New York City Police Department and IBM to use our ARIS computer system to replicate, for the DOE, the Compstat system that the police use to track crime. This system will track educational progress and students’ behavior right down to the classroom level, and will help us hold those in charge accountable.

GBN: How will it work?

JK: As you know, ARIS can track every aspect of our students’ school day, from test scores to bathroom visits. All ARIS information will be fed on an ongoing basis into a central database, which will be constantly analyzed. If we see a problem in a particular school, we can respond on an immediate basis and take care of the problem before it gets out of hand. For example, suppose a class bombs out on an interim assessment. We will have a response team on call to go immediately to the school and take over the situation.

JK: First, we need to secure the school. That means a mobile scanning team to rid the school of dangerous weapons like cell phones. “Safety First” is our motto, and we want to make sure that no kid jeopardizes our response team by, say, throwing a cell phone at them. And don’t think it hasn’t happened. Anyhow, then we arrest the Principal, and our mobile administrators assume temporary control of the school.

GBN: Why arrest the principal?

JK: The school is the principal’s responsibility. Obviously, if they’re part of the problem, then they can’t be part of the solution.

GBN: What else will the team do?

JK: Next, we bring in a Brink’s truck and flood the school with money. Nothing motivates like giving people money. We immediately double the incentive awards: $10 to take a test, $100 to ace it. That sort of thing. Then, it’s intensive test prep 24/7, for a week.

JK: Then, if things still don’t improve, it’s obviously a “failing school” and we take away their funding. Nothing motivates like not giving people money.

GBN: There has been a lot of criticism over what some have termed “heavy handed” security practices since Emomali Rakhmon, the former dictator of Tajikistan, took over as school security chief.

JK: Actually, “Rocky” is a great guy once you get to know him. Turns out we have a lot in common. He’s a little intense, but as “Rocky” likes to say, “better to be feared than liked”. And he really did rid the university system in Tajikistan of cell phones.

GBN: But what about the reported detainment of cell phone violators here in the city schools, at a place they call, “Little Gitmo”?

JK: Oh, “Rocky” was just kidding about that. But don’t think we’re not serious about the cell phone thing. And we just heard that the real Gitmo is up for sale, so we’re putting in a “no bid” to the Bush Administration to buy it. There are 313 principals who will be needing a place to stay soon. They thought they could bribe the Mayor and me by paying us to rescind the DOE reorganization. Imagine, thinking that paying people will change their behavior!

GBN: Speaking of “no bid”, there has been criticism, too, about the massive bus cutbacks made by those “no bid” consultants, Alvarez and Marsal. A kid recently was seriously injured, hit by a commuter bus while crossing an intersection that, if his bus route had not been cut by Alvarez and Marsal, he never would have had to cross.

JK: That’s not a fair question. Ask me something nicer. We now have a new DOE incentive policy for the press, you know. You can get $200 if you ask about the math test scores going up.


Editor’s note and disclaimer: The preceding interview is, of course, fictional. The idea that the Chancellor would ever speak to GBN news, at least without an incentive, is ludicrous. Any resemblance to persons living or dead is entirely intentional and within the realm of parody. Should the Chancellor feel that anything written above is offensive or reflects badly on him, GBN News will not only apologize, but will deny under oath that we ever wrote it. For a price.
Posted by Gary Babad at 6/22/2007 04:32:00 PM

Gary, any offers of a DOE job yet? Looks like you have a SERIOUS in with Joel Klein!

So far the only thing I've been offered is one of those "off site" jobs in Tajikistan. I guess "Rocky" still has some influence there. But I told them if I'm going to work for a dictatorship, I'm holding out for the "real thing" at Tweed.