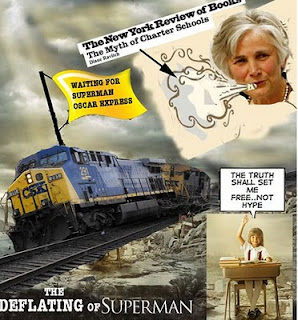 Shocker! Waiting for Superman, the most heavily promoted documentary of all time, was snubbed for an Oscar nomination!

The film failed to get an Oscar nod, despite millions spent on making and promoting it by the privateers. Did Diane Ravitch's brilliant critique in the NY Review of Books have a negative effect?

Here's the first article in Movieline, back in November, that suggested her scathing review might hurt the film’s chances to win, but I don’t think anyone anticipated it would not be nominated.

Here’s the analysis by Valerie Strauss in the Washington Post which followed, speculating whether Diane’s takedown might have an effect on its chance to grab the prize.

Clearly, if anything the movie should have been considered in the category of fictional drama instead; see why in my Huff Post column, Fact-checking Waiting for 'Superman': Documentary or Urban Myth? Here are other corrections from Choire Sicha,; the NY Times also revealed how the moviemaker had faked certain scenes.

Now, Inside Job appears to be the Oscar favorite in this category (& my own!) A similar film needs to be made about the “inside job” now being done to undermine and privatize public education.

Let's hope the failure of Waiting for Superman means the tide is turning, and that people are no longer going to by the empty propaganda foisted us by the Billionaire Boys Club.

Thanks to David Bellel for the brilliant illustration.

I found your website perfect for my needs. It contains wonderful and helpful posts. I have read most of them and got a lot from them. To me, you are doing the great work.

I'm overjoyed that the Academy could tell the difference between a documentary and an advertisement.

Let's hope that history will record this despicable propaganda film, as well as those who created it -- the smug mendacious hipster Gugenheim, and his reactionary backers including Bill Gates and Bircher Philip Anschutz -- as the sad result of what happens when plutocrats try to deceive the public.

You really ought to connect with these guys: http://edreformeriffic.posterous.com/i-student-everyone-saw-this-coming-edreformer

Hey very nice blog!! Man .. Beautiful .. Amazing .. I will bookmark your blog and take the feeds also... Big thanks for the