The Not-Quite-Good-Enough-Chancellor and her Sidekick? 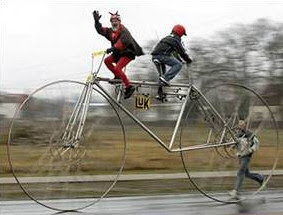 Bowing to the painfully obvious, even the stacked panel assembled by Commissioner Steiner voted to deny Cathie Black the waiver she needs to overcome her utter lack of qualifications to be NYC's schools chancellor. But our very clever Commissioner had something up his sleeve: he gave the panel a third choice besides "yes" or "no": a co-chancellorship of sorts with someone who actually knows something about education. Bloomberg promptly submitted a revised waiver application, adding man with education credentials Shael Polakow-Suransky to help out the corporate exec formerly billed as the only person who could do the tough job of NYC schools chancellor.

What good can come of this scenario?

Looking through the very long list of things Suransky will be responsible for, one can’t help but ask: will there be anything left for Cathie Black to do besides wielding the budget ax? That certainly entails “difficult decisions” (as Bloomberg never tires of reminding us), but it’s hardly worth the highest salary in the city. Ms. Black should have the decency to cut her salary to $1/year, which she can certainly afford and will go a ways towards plugging that gaping “public interest” hole in her résumé (at the press conference announcing her appointment, Bloomberg actually talked about her husband’s public service, LOL).

And why is this new position--formally, Senior Deputy and Chief Academic Officer-- necessary? At the press conference, Bloomberg dismissed all questions about Black’s lack of credentials or prior interest in education by claiming she would rely on the formidable cadre of education experts put together by Klein, especially the deputy chancellors. Suransky is already a Deputy Chancellor and Chief Accountability Officer--why does he need a different title if Black was going to rely on him and the rest of her team (including presumably former Klein heir-apparent Eric Nadelstern) for all things education anyway? It's also worth noting that the very qualities that make a good CEO don’t make a good team player (that’s quite different from getting subordinates to work as a team); many companies have tried the dual-CEO route, often after a merger--–it doesn’t work. The Economist recently summed it up this way ("The Trouble with Tandems"):

Almost all these relationships have ultimately come unstuck. That should hardly come as a surprise because joint stewardships are all too often a recipe for chaos. Rather than allowing companies to get the best from both bosses, they trigger damaging internal power struggles as each jockeys for the upper hand. Having two people in charge can also make it tougher for boards to hold either to account. At the very least, firms end up footing the bill for two chief-executive-sized pay packets.

Why should we believe DOE is any different? Especially since the very logic of naming Cathie Black to lead it is that education should be run like a business?

WHY WE FAILED TO PREVENT "BLACK-GATE"

Ed Notes has focused in on the chief problem-- the incredible inertia among NY's 80 or 90 thousand teacher Rank & File.

The very last time I saw the R & F come together and rise up was the great City wide Strike of 1968 which was an amazing event to behold in my very first year of teaching (Fort Apache).

It takes a truly huge event to wake up the R & F from their habitual, status quo slumber.

When the effects of the Black-Gate disaster begins to decimate the R & F, job security, Seniority, and thousands of heads begin to roll- perhaps then what Ed Notes says is required will begin to come together- and you will start to have that Chicago CORE like Critical Mass.

When I stood outside Steiner's building to deliver the 12,000 signatures and noted the meagre turnout of people (long after schools had let out for the day), it was clear to me it was all a lost cause.

What was needed was just a thousand signatures but 12,000 boots on the ground tying up the entire Upper East Side around Steiner's residence during Rush Hour.

The never ending mistake of believing that pressing the Petition send Button on a laptop will alter the Universe is a true Grand Illusion.

Revolutions and Change succeed not by signing petitions but by REAL ACTION. That mean filling Chambers Street from the East side to the West side with YES- I will say it again and again- BOOTS ON THE GROUND. And then the right charismatic Leader/ Speaker/ Galvanizer of People speaking to those Boots over a Two thousand Mega watt speaker.

The above is the ONLY language the POWER ELITE have ever understood and taken notice of since the dawn of history.

No Dictator has ever voluntarily relinquished power because someone said: "Gee-pretty- PLEASE with a cherry on top".

Black-Gate could have been nipped in the bud last week with a paltry two or three thousand marching Boots on the Ground in front of the Tweed Courthouse, and in front of King Bloomberg's private mini Palace on East 79th Street during Rush Hour.

But for all the talk- no one would Walk the Walk.

Maybe when the entire Rank & File begin to feel sufficient PAIN- that four letter word that has a way of getting people off the sofa-they will arise from their slumber.

It happened in Chicago and while Ed Notes is correct that it is more difficult here, it could yet happen.

But a gargantuan opportunity was lost during Black-Gate. Needless to say an Al Shanker type Leader would have made all the difference.

Instead we got a "Quisling"-- the very last thing you want or need when the odds are already so stacked against you.

It is all enough to make the Angels weep.

Frankly I am still drying my eyes as I hear the Champagne glasses clicking in my neighbor's Town house at 17 East 79th Street.

Did I just hear The Queen of Coke snip: "Let them eat cake" as the room full of celebrity guests roared with laughter-- adding-
"Oh- and thanks encore, Mike- no one knows how to do it like you do". "No wonder you are so wealthy".

I noticed these rallys are announced at the last minute (with only 1 day or half day notice). How are you supposed to notify every NYC parents & students to come when it is such short notice? Students have after-school activites, parents have plans already.

Also, many parents are working (Double-income family or single parent family), most can't take half day off from work (hello layoff & getting fired from work due to frequent days off).

It is quite true that for many parents (which includes teachers with kids) it is difficult to attend mass rallies.

That is why they should begin between 5 PM and 6 PM and those that must will arrive later.

They must also be announced well ahead of time.

All that said- I fail to understand why it seems impossible to even garner one tenth of one per cent of parents to find a way to attend. The turnout for the delivery of the signatures was a disaster if we wanted to get the attention of the media. Reporters were at least one third of the tiny group of people who showed up - TO LITERALLY SAVE OUR SCHOOL SYSTEM from Armaggedon and I know the organizers broke their backs to get the word out.

Out of a million parents and almost 90,000 Teachers I could count the "crowd" outside of Steiner's residence in 20 seconds.

It broke my Heart with so much at stake. Yes- we all know the FIX was already a done deal behind the scenes of an ugly charade.

But even a thousand teachers and parents filling 87th Street last week would have been big Prime Time news and made the papers as big dramatic photos and the Deal makers might have caved. We will never know ??

But everyone thinks: "Let someone else do this- since one more person will not make a difference".

So in the end, with that type of thinking, almost no one ever steps up to the plate to be counted.

The story of the world.

That is exactly what helped the Mayor become the Mayor in addition to the fortune he spent.

This Cathie Black appt is so controversial that people across the nation are aware of it. I know reporters in L.A. Times and Washington Post are criticizing Bloomberg's secretive selection process and his high-handed style in this Cathie Black appt. Educators from different states offer advice to David Steiner. When Oprah ridiculously endorses Cathie Black, her celebrity power is far-reaching in America, yet many American people still remember the School Chief Oprah hired in South Africa was tied to sexual abuse scandal.

Cathie Black has become a curse to BOTH Bloomberg and David Steiner. Black is a BIG liability to Bloomberg's hope of running for President 2012 or other offices. David Steiner's name is forever tarnished in history textbooks as the man who sells out NYC kids and a lackey to Bloomberg.

A nationwide poll by Marist a few days ago, in a race among Obama, Palin & Bloomberg (run as 3rd Party), Bloomberg only got 15% nationwide voter support. 61% oppose Bloomberg running for President 2012. It's almost 2011, any Prez candidates will start pitching soon.

I would say Bloomberg won a Pyrrhic victory by appointing & actually securing Cathie Black a job as NYC Schools Chancellor.

Cathie Black is a big curse to Bloomberg either way.