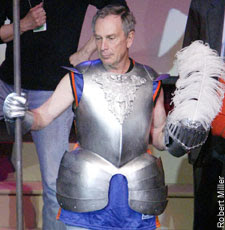 I don’t get this NY Times article; the City Council gives a third term to a billionaire bully with dictatorial tendencies, and now they expect him to play nice? What could they be possibly thinking?

Too bad the Obama administration has apparently written Bloomberg off, which might take him off our backs, according to the NY Observer:

…..There’s at least one famous New Yorker who is less likely to get a call from the Obama administration than was once supposed.

Despite the advice he has offered to the next president in Newsweek columns, Mayor Michael Bloomberg is no longer in consideration as a candidate for a top job. To the degree that he was discussed at all, Mr. Bloomberg’s name all but vanished from serious conversation when he pushed a bill to overturn a two-term limit on city elected officials through the New York City Council, according to a number of insiders interviewed for this article.

Their gain but our loss.

I contacted every Queens council person asking them to leave it up to the voters. But, it didn't help.

I was surprised that city school parents and teachers did not raise hell about this either through petitions or rallies.