One mother's letter to Obama 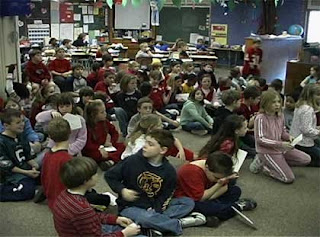 There have been many eloquent emails sent and petitions signed in the past few days, warning Barack Obama against hiring Joel Klein as Secretary of Education, ever since his name was first floated as a possible appointment.

Even the national media has finally picked up on the fact that Joel Klein is not universally adored among NYC parents; see this excerpt from today’s US News and World report:

Teachers and parents, however, have complained about his management style, saying he is too brash and unresponsive to their concerns. Is the country ready for his reformist agenda or would he demand too much, too fast without enough support from key players?

We just received a copy of the following letter to Obama, from an mom, and wanted to share it with you. You can send a letter to the President-Elect's website at http://www.change.gov/yourvision

I am a public school parent. My son is a fourth-grader at a public school on ’s . I understand that New York City Schools Chancellor Joel Klein is rumored to be one of your choices for Secretary of Education. In my view, Chancellor Klein is a truly abominable choice for this position and I feel compelled to speak out. public school children and their families have suffered under his authority and it would be a shame for the country’s children to similarly suffer.

By far, Chancellor Klein’s most egregious transgression relates to the serious overcrowding of public schools.

During Chancellor Klein’s tenure, has experienced a real estate boom. Numerous new residential buildings have been built but Chancellor Klein has not ensured that there is adequate public school space for the growth this has brought to many neighborhoods. The Office of the NYC Comptroller, William J. Thompson, Jr. issued a report in May, 2008 entitled, “Growing Pains: Reforming Department of Education Capital Planning to Keep Pace with New York City’s Residential Construction.” Tts opening sentence is this: “The capital planning process for public schools in is broken.”

It goes on to detail numerous Department of Education failures in everything from flawed enrollment projections to the fact that capacity needs are understated and are “not sufficiently forward-thinking or responsive to changing neighborhoods”.

In April, 2008, Manhattan Borough President Scott M. Stringer released a report entitled, “Crowded Out”, a borough-wide analysis of residential development and its relationship to school capacity. In a press release dated September 5, 2008 discussing the report, Stringer says, “While the Department of Education continues to announce the opening of schools – either new or replacement facilities – it is not keeping up with the pace of new development, and with the commitment New York families are making to stay in the city and use their neighborhood public schools.”

What does this mean for public school children on a daily basis? Let’s take my son’s school as an example. In the last few years, we lost our lower-grades art classroom. Lower-grade (K-2) children now have art in a cramped, windowless former teacher’s lounge. We have also lost both our lower-grades and upper-grades (3-5) music classrooms. Our music teachers carry equipment, instruments, music, etc. from classroom to classroom. We also lost our computer room. The computer teachers travel from classroom to classroom with 25 laptops in tow. Many times, half of the computer period is taken up just setting up the computers at the children’s desks and then putting them away.

I applaud our teachers for making the necessary sacrifices and for doing their best under the circumstances but teachers shouldn’t have to work in these conditions and children shouldn’t have to learn in these conditions. With the loss of these classrooms, outside of lunch and recess, our children now leave their classrooms only twice a week: once for gym and once for art. There is a natural benefit to some physical movement between classrooms during the day but our children don’t have that option. Besides classroom issues, there are numerous teachers who work out of closets. We also have some children with no choice but to have lunch at 10:30am because of the number of classes our cafeteria must accommodate.

Because of Chancellor Klein’s failure to make certain that adequate space exists to meet the demand for public school, the conditions under which many children now attend school are unacceptable. As the highest-ranking education official in the city, Chancellor Klein ultimately must bear responsibility for the current and extremely serious overcrowding affecting thousands of public school students.

Additionally during Chancellor Klein’s tenure, an inordinate focus has been placed on standardized testing, test scores and test preparation. All children in grades three through eight are subjected to multiple standardized tests in a variety of subjects.

Test scores affect our school’s ‘report card’, compensation for our principals and teachers and our school’s funding. I recently learned that my son’s class would have no publishing parties (celebrations of the children’s writing pieces to which parents and other family members are invited typically held several times throughout the school year) and no field trips with the exception of an hour-long museum trip for the first five months of the school year because upcoming testing and the preparation for those tests requires too much time.

Chancellor Klein’s excessive emphasis on testing is at odds with essentially all other partners in a child’s education: parents, the children themselves, teachers, administrators. Yet the emphasis continues so that now we see the Department of Education instituting standardized testing for kindergartners! Please see a New York Times article discussing results of a survey in which 85% of public school teachers disagree with the statement that the Chancellor’s emphasis on testing had improved education in their schools.

Can our country really afford to have 85% of its teachers dissatisfied with how the Secretary of Education leads?

Finally, Chancellor Klein has consistently conducted himself in an authoritarian fashion. Parents, in particular, have repeatedly been disenfranchised and diminished. While great show is made of soliciting input from parents, teachers and administrators, in fact, it is just that . . .show. Parents realize that their input means little in the eyes of the Department of Education, as run by Chancellor Klein.Chancellor Klein’s poor performance in his role as highest-ranking education official in is likely due to the fact that he is not an educator. He is an attorney. Education needs a human touch. I believe that successfully educating our nation’s children requires a thoughtful and highly-functional partnership between administrators, teachers and parents. In , Chancellor Klein has proven that he is incapable of being such a partner.

This well thoughtout analysis of a NYC parent should give Obama pause about the idea of making Joel Klein the head of the US Dept.of Education.It would be like making Bull Connors (is he still alive?)the head of the NAACP. Klein is the total antithesis of what an Education leader should be. He is just a number crunching, test driven "corporate man" masquerading as a School Chancellor. I will have serious doubts about Obama's wisdom if he appoints Klein as Head of the Dept. of Education.