A warning to Australians: don't let your kids suffer, as have ours! 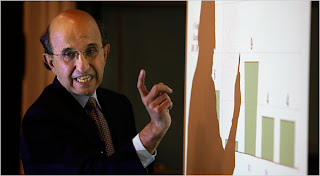 This week, Joel Klein is visiting to promote his educational policies and perspective. To alert Aussies to the disinformation campaign he will likely be spreading, we have deconstructed a recent interview on Australian TV with Klein, carried out by journalist Kerry O'Brian, and aired last month on Australian TV.

[The full video of the Klein interview is here and the transcript here.]

Question: "You can't have a system corrupted or distorted by a principal under pressure or a principal that wants to boost his or her status by encouraging teachers at the school to go soft on the students in tests to help them cheat in effect?"

JOEL KLEIN: "It's happened on a handful of occasions since I’ve been here and we’ve terminated principals, terminated a couple of teachers at one point, but I don't think systematically that's a powerful explanation.

And even before our system there was a Federal system here in the under "no child left behind." So schools are under a certain amount of pressure, but I don't think somebody is going to imperil their livelihood by taking the risk of trying to have students cheat on exams."

In reality, there is now rampant test prep in NYC schools – as well as many serious allegations of cheating – few of which are ever followed up by this administration, even when the allegations are based on reliable evidence from people on the ground. In fact, many principals have been promoted and given bonuses whose schools have seen large and unexplained boosts in test scores. See for example this article, detailing allegations about cheating at one school, where test scores jumped 30 points in one year, where Chancellor Joel Klein spoke at the school's graduation while wearing a " in the Universe" T-shirt.

In fact, Klein doesn’t appear to care what’s causing test scores to rise, as long as they do. And as pointed out by independent experts like Diane Ravitch, as well as in the NY Times and elsewhere, test scores on state exams have not been matched by NYC's results on the more reliable national assessments called the NAEPs. Indeed, an analysis of NAEP scores between 2003-2007 reveals that NYC came in 10th out of 11 urban school districts across the nation in changes in test score changes over the course of this administration.

In a 2006 audit, the State Comptroller found that only 20 additional classes were formed in NYC schools over the baseline figure, despite $89 million in annual state funds specifically allocated to reduce class size. The audit concluded that “while the [NYC] DoE was receiving State funding… it was reducing its own support for early grade class size reduction and using it for other purposes.” The NY State Comptroller proposed a number of recommendations to improve compliance with the law– all of which the Chancellor rejected.

Then again, this past September, the NY State Education Department found that despite commitments by the city to use millions of dollars in new state aid to reduce class size, instead “53.9% of schools reported that either class size or pupil-to-teacher ratio increased in 2007-08.”

Accordingly, over 80% of NYC parents say that there has been no improvement in class size under this administration, and 86% of NYC principals say that they are unable to provide a quality education to their students because of excessive class sizes at their schools.

JOEL KLEIN: "The President of our [teachers] union, who's also the President of the National Union, she said on the first day of school this year in September that she had been traveling around the and no place, in any urban area, was comparable to the work that we're doing. In fact he word she used was that had become a beacon."

Among NYC teachers, there has been overwhelming disapproval of the leadership and policies of Joel Klein. Last year, the NYC teacher’s union released its own survey, showing that 85% of its members believe that Klein has refused to provide the support and resources they need to succeed; 85% disagreed with his emphasis on high-stakes testing; and 83% said that he had put other interests above the learning needs of the children.

According to Klein’s top spokesperson, only two out of twenty of the top administrators at the Department of Education are long-term educators; instead, he has largely staffed the Department with corporate consultants and attorneys.

In the past few weeks, thousands of teachers in NYC and elsewhere have signed petitions, warning President-elect Obama not to appoint Joel Klein to his administration, because of his misguided policies.

Check out this petition, which has been signed by nearly 4200 educators in NYC and nationwide:

"The NYC Department of Education under Joel Klein has been run like a ruthless dictatorship -- with no input from parents or educations. Teachers have not been respected, consulted, nor listened to. And little thought has been devoted to how the policies he has imposed on our schools have been destructive to the children and their futures...While focusing on test scores, he has consistently ignored the crisis of overcrowding in NY schools. Thousands of children are being given special services in hallways or in closets."

See also this petition, signed by more than 3600 teachers and academic experts nationwide, in opposition to Joel Klein's "vision of privatized, corporatized, and anti-democratic schools."

QUESTION: "How do you answer the critics who say your school statistics are flawed because of wild statistical fluctuations or results from year to year, which suggest fundamental flaws?"

JOEL KLEIN: "I don't think that's a fair criticism. I've actually studied the statistics. There are some year to year fluctuations that are significant, but that's because schools that weren't making progress refocused and decided that the risk to them was they were gonna close.

"And so they decided that they would focus much more effectively on promoting student performance. But all of these things will come out over the years, meaning this is not a one year or two year experiment.”

Some year-to-year fluctuations? School grades have widely varied between one year to the next, which is not surprising considering they are primarily based on one year's worth of test score gains or losses, which experts have shown to be 30-80% random.

See this analysis by Daniel Koretz, an expert on testing and statistics from Harvard, pointing out that three quarters of NYC schools that received an “F” last year received an “A’” or “B” this year. As Koretz writes:

“It strains credulity to believe that if these schools were really “failing” last year, three-fourths of them improved so markedly in a mere 12 months that they deserve grades of A or B ...This instability is sampling error and measurement error at work. It does not make sense for parents to choose schools, or for policymakers to praise or berate schools, for a rating that is so strongly influenced by error.”

Aaron Pallas and Jennifer of have concluded that “The progress measure…is a fruitless exercise in measuring error rather than the value that schools themselves add to students.”

As another of their summaries suggest, “a Monkey [could] Do a Better Job of Predicting Which Schools Show Student Progress in English Skills than the New York City Department of Education."

In short, NYC parents and teachers have this advice for Australians: Do not be fooled by either Klein or his claims.

Achievement has not significantly improved under his leadership. Instead, his administration has consistently misused millions of dollars meant to reduce class size that would have provided children with a better chance to learn, while spending millions more in taxpayer funds on expanding the bureaucracy with high-paid corporate consultants, no-bid contracts, and more testing in our schools.

Along the way, he has stubbornly refused to listen to parents, teachers and academic experts who have pointed out the destructive impact of his policies.

Take heed -- and reject these policies that will cause your kids to needlessly suffer -- as have ours.

The state does some legitimate cheating--they eequate a 34% raw score to equal a 65%. Nothing illegal, only very immoral!

Recently I found College Information which offers both Associate of Occupational Studies and Associate in Applied Science degree programs. The programs of study are listed below, Business, Health Disciplines, and Criminal Justice Computer Technology. You can also Visit.