No more building schools on toxic sites without environmental review! 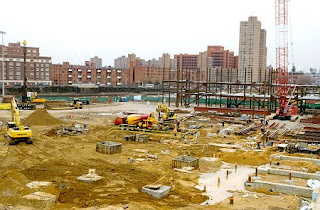 The decision from the NY State Supreme Court that there should have been a full environmental review before the School Construction Authority starting building a school complex on a contaminated site in Mott Haven is justly deserved – congrats to Dave Palmer and the people at New York Lawyers for Public Interest who worked so hard on this case. As usual, the city’s attorney has an incredibly unconvincing response:

“Ms. Noteboom said it was more practical to come up with a [environmental] plan after a cleanup had started so that the plan “can take into account the actual conditions at the site after the cleanup is done.”

et another instance in which the city has shown absolutely no regard for the health and safety of our kids.

Moreover, by skirting the necessary environmental review, the School Construction Authority may in the end spend more money and more time to try to remediate a toxic site than they would if they found a less contaminated land elsewhere. See this excellent oped from last year by Dave Palmer which makes this very point, among others.

We have noted previously on this blog the apparent determination of this administration to build public schools on toxic sites without properly addressing the risks to our children – and once these schools are built, their refusal to properly remediate the contamination – here, here and here.

The city claims that contaminated brownfields are the only open land available for schools – but clearly, this is not the case. It may indeed be the only land that nobody else wants—and cannot be cleared for the benefit of private developers, which appears to be the city’s highest priority: to serve the interest of developers at the expense of our children.

In the new five year capital plan, released last week, nearly $1 billion of the meager $3.7 billion to be spent on new school construction is being held in abeyance, for “potential site specific/environmental/code costs.”

I have never seen this line before in a capital plan – and it makes one fearful that the SCA is planning to build as many schools as possible in future on toxic sites.