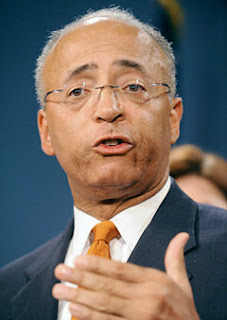 See the priceless piece in today’s Daily News, about how Comptroller Thompson sent a letter to Chancellor Klein, challenging him on his oft repeated claim of having saved $200 million from the bureaucracy, and another $290 million last year.

Klein responded by writing that Thompson’s letter “is riddled with errors." Only Klein’s own letter had a basic mistake in the math:

Here is an excerpt from the Thompson letter:

I have indicated previously that the Department appears to be engaged in a "shell game." This latest review does nothing to dispel that judgment. As I am sure you will agree, Exaggerated claims undermine the Department's credibility, and the withdrawal of critical information—such as the cessation o f school-based-expenditure reports-limits transparency and accountability.

As the City's budget is being formalized, it is critically important that accurate data be used to guide DOE decision making. I therefore, and once again, strongly urge your office to resume the publication of reliable school-based expenditure reports so that analysts and the public have a transparent view of DOE's efforts.

Clearly, wherever they made cuts, it wasn’t at , where wasteful spending, high salaries, and the headcount continue to grow each year.

And though the article says that Klein referred to the fact that “The Independent Budget Office pegged the savings at $221 million” the IBO also said they couldn’t confirm that this amount was redirected to schools, as the DOE claimed, and in fact, couldn’t figure out where the money was spent.

Here is an excerpt of an email to me in March of 2007 from George Sweeting, the deputy director of the IBO:

“We did conclude that there were substantial savings, but we also said that the available information made it hard to tell how much was redirected to the schools or elsewhere in the DOE budget. The difference between our numbers and the Comptroller’s result from assumptions about what to include as administrative savings. The analysis was described in our March 2005 report on the Mayor’s Preliminary Budget for 2006. http://www.ibo.nyc.ny.us/iboreports/march2005.pdf; The discussion is on page 65 of the report (page 71 in the PDF).

There’s a follow-up on this controversy on NY1, with more comments from Klein, who added today that “he's working on new solutions to school overcrowding in difficult economic times.”

Please, Mr. Klein: tell us what they are; perhaps as in your letter, your can simply underestimate the thousands of students in overcrowded schools by a factor of ten.

DOE's fuzzy math" strikes once again. What else is new?