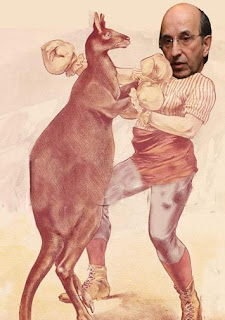 The Australian media continue their refreshingly skeptical coverage of Joel Klein’s promotion of his educational policies during his visit down-under.

The Education Minister, Julia Gillard, is pushing for states and territories to adopt a similar system of transparency in . On Monday she softened the blow for disadvantaged schools by announcing $500 million in funding to help them to entice good teachers.

But the woman Mr Klein described today as "a bold and fearless leader" should be warned. The model has come under attack for its narrow measure of what made a school good.

A 2006 study by the Centre on Education Policy showed that so much emphasis was being put on reading and maths that it caused a decline in teaching of history, science and the arts.

A similar model in could leave little incentive for schools to improve teaching in subjects other than the "basics" measured. Sport, music, art and foreign languages could suffer as schools sweat to meet indicators.

Joel Klein is in Australia to "spruik" his business-friendly school reforms courtesy of the giant Swiss bank UBS, the recipient of a multibillion-dollar bail-out from Swiss taxpayers, and dubbed the "world's biggest subprime loser" by The Age.

The federal Education Minister, Julia Gillard, "welcomes the active involvement of UBS" in education reform. Since her recent US visit, she has been championing the "remarkable outcomes" she claims Klein has achieved in , where he is the chancellor of the city's education department.

Klein, who was previously chief executive of the international media company Bertelsmann (and who had an article on this page on Monday), believes schools should be run more like businesses, and is an enthusiastic promoter of "charter" schools, some of which are operated for profit. He told Fortune magazine, "We're converting the role of the principal into a CEO role."

On occasion, according to The Nation magazine, Klein has referred to children as cars in a shop, a collection of malfunctions to be adjusted. Teachers, he said, needed "to look under the hood" to figure out the origins of the pings. …In the , as much as a quarter of the school year can be devoted to test preparation. The assessments are supposed to show where the students have gaps in their knowledge so lessons can be adjusted. For the first few years of any testing regime, as students get used to sitting standardised tests, as teachers learn how to teach to the tests and as schools narrow their curriculums, test scores tend to improve. So it is not surprising that students are getting better scores in the national standardised tests.

This enables Klein to claim great educational improvements even though a national study released earlier this year using 2004 data found that has one of the worst graduation rates in the , 43rd out of 50 large cities. Gillard is preparing to adopt key elements of Klein's business approach for use in Australian schools on the basis of Klein's ability to improve student test results, without examination of what those test results really represent. Will she unquestioningly adopt the business mantra of "standards, assessment and accountability" in the face of opposition from education experts?

Education is not a business and corporations that have made such bad judgments with regard to their core business, like banks, shouldn't be poking their gnomic noses into our schools.

US educationist talks tough on schools The Age ()

In his speech, Mr Klein said his controversial methods, including standardised testing, had transformed the culture of his city's schools from one of excuses to one of performance.

But Australians are divided over Mr Klein's approach. Vicki Froomes, one educator who worked with the schools Mr Klein threatened to close, said teachers would "teach to the test".