Mr. Klein goes to Washington? How would you feel? 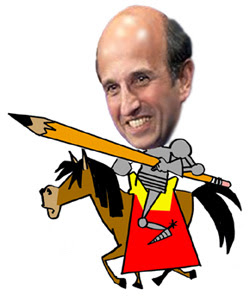 In today’s Washington Post, there is an article that says Joel Klein is a possibility for Sec. of Education in an Obama administration:

“Among those under consideration who would mark a departure from the tradition of rewarding loyalists and party leaders include New York City Schools Chancellor Joel I. Klein for education secretary and retired Marine Corps commandant Jim Jones for national security adviser. Both are viewed as non-ideological and have the potential to rankle liberal Democrats.”

There’s a much longer list of possible candidates for the job in today’s Chronicle of Higher Education, that includes at three sitting governors, Janet Napolitano, of , Kathleen Sebelius of , and Timothy Kaine of , as well as the former Gov. of North Carolina, James B. Hunt Jr. None of them would be as controversial – and (contrary to the above assertion) as rigidly ideological -- as Joel Klein.

What do you think – which would be worse? Having Joel Klein become the Secretary of Education, or being stuck with him remaining as the NYC Chancellor? And if he left, who would be likely to replace him? Chris Cerf?

I'm kind of hoping he hires Mayor Bloomberg to be Secretary of Rich Guys.

In the Kingdom of Bloomberg, nature abhors a vacuum of minions. Sending Klein to Washington would inflict him on the nation for no benefit to us as others just like him will take his place.

I definitely have a place where he can go.

Bush and Bloomberg and Klein all started together around six to eight years ago...Dear Obama, I thought we were talking "change" here.

Don't you think that the Chancellor would better serve the mayors quest to claim victory in education in NYC by taking over the State Education Department in June when Commissioner Mills steps down? That would be the most empowering move for this regime than sending Mr. Klein to Washington.

How I hope that Mr. Klein gets the position. This is the only way we can get rid of him. Let's be realistic. As things stand now, we're going to have the 2 rascals- Bloomberg and Klein for another 5 years. The New York City school system can't survive 5 years with either of these gentlemen at the helm.
Let's face reality, the Secretary of Education has little to no impact on New York City schools. Therefore, this would be the best thing that ever happened. If it doesn't, let Mr. Klein get Richard Mills'position which becomes vacant after June, 2009.