Why does the NY Times feature the voices of LA public school parents, but not ours? 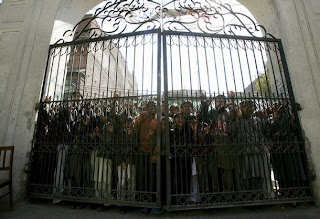 It’s a good column, pointing out that parents of public school children should have a real voice in the policies in their children’s schools, as well as nationally, and how her group has been actively working so that a fellow parent can elected for a seat on LA’s school board.

It’s sad that parents here in NYC do not have the same opportunity, as we have no elected school board. The PEP is made up of mostly mayoral appointees and votes in lock step with every decision announced by Joel Klein, no matter how arbitrary and ill-considered, and as a result, its meetings are almost never covered by the NY Times.

Nor, to my knowledge, has the Times covered a single one of the many hearings and debates on Mayoral control that have occurred over the course of recent months, sponsored by legislators and other independent groups, featuring the informed views of countless disillusioned parents, advocates and the elected officials themselves, who have openly decried not only the manner in which this administration unilaterally imposes its policies but have also offered substantive critiques of these policies.

Indeed, it is disappointing that the NY Times has never offered the same sort of platform to a NYC public school parent as they have to Ms. Lo, but consistently excludes our voices from the public debate.

As a result, I think they have done a disservice to their readers, as few regular subscribers to the Times, supposedly the paper of record, probably have any idea how discontented most parent leaders feel about this administration.

Please let the NY Times know what you think, by posting your views in the comments section of Ms. Lo’s blog.My comments to the NY Times are below.

-------------
I enjoy these columns by Sandra Tsing Lo, admire her activism and agree with many of her positions, especially as regarding the need for bottom-up reform from actual stakeholders like public school parents, rather than the top-down ideological approach that now prevails on how to reform urban schools, propounded by so-called experts, most of whom have never actually sent their own children to these schools.

But my question is this: why does the NY Times feature her column, while not giving the same sort of access to any NYC public school parent? Are our views not equally worthy of consideration? Or is our perspective simply too challenging to the opinion elite and the powers-that-be here in NYC?

It is disappointing that in the city that the NY Times makes its home, our views are consistently ignored and shut out of the debate over education policies. And yet there are many NYC public school parents who can write with the same passion, conviction, and intelligence as Ms. Lo.

Mayoral control has delivered results. We cannot go back to the bad old days, where we had 32 local boards and a board and a chancellor and a mayor, but no one who could be held responsible

Check out our more recent posting, pointing out that the first of these Anonymous commentators is likely working for the Mayor's organization called MASS -- at "The Mayor's campaign to keep control over our schools has begun."