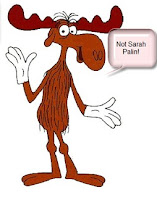 November 19, 2008 (GBN News): NY City Schools Chancellor Joel Klein has hired Alaska Governor and former Republican Vice Presidential candidate Sarah Palin as a public relations consultant for the Department of Education, according to GBN News sources. The move has not yet been made public, the sources say, due to fears over possible negative publicity. However, it appears that Ms. Palin is already on the job. The abrupt change in agenda at last Monday’s PEP meeting was said to have occurred on her recommendation.

GBN News was told that Chancellor Klein had been very impressed with Ms. Palin’s performance in her debate with Joe Biden, where she brazenly deflected a topic she did not want to address, in favor of one more compatible with her agenda. The PEP meeting was just the sort of situation that Mr. Klein hired her to help deal with; the agenda, special ed, was one which the Chancellor had no interest in addressing.

Because the meeting was supposed to feature an update on special education, numerous special needs parents and advocates were in attendance. However, at the last minute, the meeting was switched to a briefing on accountability instead of special ed, risking the fury of those who had come specifically for the special ed update.

Chancellor Klein, at Ms. Palin’s suggestion, began the meeting by stating, “I may not talk about the stuff that those elitists around here wanna hear, but I’m gonna talk straight to the children of New York City and let ‘em know what we’re gonna do.” He then introduced the DOE Chief Accountability Officer James Liebman, referring to him as “Jim the Tester”. The Chancellor’s use of this moniker was also attributed to Ms. Palin, who advised him that the people attending the meeting would feel more comfortable with the change in agenda if the presenter were portrayed in a folksy, non-threatening manner.

Ms. Palin’s PR imprint was apparent in other ways as well. At the meeting, when a questioner challenged Mr. Liebman’s qualification to be Assessment Officer because he is not a professional educator, Liebman responded, “But I can see a school out of my living room window.” And the DOE may also be trying to discredit certain members of the press whom the Chancellor is said to feel are too critical of the Department. A DOE official, on condition of anonymity, accused GBN News Editor and CEO Gary Babad of “palling around with terrorists”, citing a NY Times article in which Babad admits that his grandmother was a Communist.
Posted by Gary Babad at 11/19/2008 06:21:00 PM