The Mayoral control troll introduces himself! 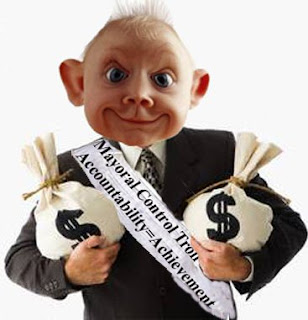 One of our brilliant readers suggested the name of “the Mayoral control troll” for the Anonymous blogger who left pro-Bloomberg talking points all over our blog and throughout cyberspace in support of the Mayor keeping his iron grip on our schools.

Unfortunately, Anonymous outed himself before we could write about him – in the comment section on our blog below.

He is Brian Keeler, VP of Politics and Advocacy for VShift – a media consulting company, and as we guessed, he is working for MASS, and its new website, www.learn-ny.org, the organization Bloomberg established to retain control over our schools. VShift is conveniently located at 895 Broadway, along with MASS, and its consultants, the Global Strategy Group, NY’s most influential political consulting firm. On the same floor is the “MirRam Group” run by lobbyists Roberto Ramirez, former chief political boss of the , and Luis Miranda, also chair of the board of the Campaign for Fiscal Equity.

Elizabeth Green of Gotham Schools writes about Brian and the launching of MASS’s new campaign. Another article quotes Brian about how to work online “social media” to market a product:

Brian Keeler, a vice president at media consultancy VShift, said the key to social media is credibility and enlisting consumers in the act of marketing itself. But if you upset your audience, it can mean trouble. “With the online media, things can go viral and spin out of control really fast,” he said.

Here are excerpts from the VShift website, which reminds their clients:

It is important to remember that competitors will respond in some way to your actions in the market so it is useful to consider what they may do and prepare for it. We help you respond to the competition and determine the best course of action.

Here is the message I sent Brian today:

Nice to meet you, and thanks for introducing yourself on our blog.

A question: are you a NYC public school parent? Do you live here in NYC? Are these webpages about you, or another Brian Keeler?

In any case, to give you some background, we’ve been living the last six years under the nightmare of an administration that is both incompetent and that doesn’t give a damn about how parents feel about how their kids should be educated; and that openly and continually dismisses the issues we care about, like class size, even though Bloomberg and Klein themselves sent their own kids to schools where no classes were larger than 15.

Though you may have millions of dollars to spend try to convince less involved and aware NYers otherwise, it will be a hard slog to convince us that this administration has been accountable to parents, or to anyone else for that matter, aside perhaps from the “real” stakeholders in this system, which as Gary Babad has pointed out, have been the Gates and Broad foundations, as well as the sons and daughters of Bloomberg’s billionaire buddies, who’d like to set up their own charter schools inside our already overcrowded school system.

But hey, we’re open to listening to what substantive proposals your organization may have to ensure that parents have more input in the future, that there is more transparency, and even perhaps, that in the future, the administration may intend to comply with state and city laws. Indeed, accountability in our democratic system surely does not equal dictatorship.

And though you claim that you “are advocating for the renewal of the law regardless of who the mayor will be”, it is well known that Mayor Bloomberg intends to spend up to $100 million of his private fortune to get re-elected, as well as countless millions more retaining his iron grip on our schools.

How about having a public discussion about some of these matters? You or anyone of your choosing? I’ll even bring the snacks.

Thanks, by the way, for you or whoever corrected the misspellings and at least some of the statistics on your website, after I’d pointed out these errors on our listserv late last night. Perhaps Bloomberg could pay me a salary to copy-edit your site?

So, we have:
1)David Cantor (and God knows how many other members of Klein's bloated press office)monitoring the parents' listserv--he doesn't answer uncomfortable questions directed at him, of course, but does surface once in a while, mole-like, with a "gotcha" to keep us on our toes.
2)Brian Keeler, paid consultant for Bloomberg's PR offensive, littering on our blog-- because, truly, the fawning that he tried to pass off as commentary does not have enough substance to be worthy of a response by busy people;
3)Shills for BloomKlein packing hearings, "testifying" with great passion from curiously similar scripts, full of words some could barely read though allegedly wrote all by themselves;
4) the city's main newspapers practically becoming surrogate PR firms for BloomKlein (unpaid?-- perhaps not in hard cash, but there are other currencies...), full of flattering editorials while parents' less flattering letters go unpublished and their angry testimony goes unreported;
5) Rushed hearings at short notice, tightly choreographed to maximize exposure of the BloomKlein party line and minimize the opportunity for contradiction.
There's something fundamentally wrong when a system that purports to guarantee freedom of speech can be so easily thwarted and perverted by a few million bucks.
PS: did anyone catch the piece on Georgina Bloomberg in yesterday's Post? According to the First Daughter, "When he was just a businessman, he was pretty egotistical. People were telling him how great he was every day. Politics has humbled him." Whew-who knew the softer side of Mike? But then she puts it in perspective: "Now he seems to really want to hear what I have to say. " See- she doesn't say he wants to hear what THE PEOPLE have to say.

Enough is enough. Its time to call a spade a spade. These so called educational entrepreneurs are nothing more than people who can not succeed in the real business world or whatever is left of it. Some even fail to succeed in their own private lives (i.e.)check out the article on Rhee in Time Magazine. Nor can they succeed as classroom teachers, again check out the Time article on Rhee, ergo the reason they are not in it. If they were truly entrepreneurs they would take their little greedy hands out of the tax payer cookie jar and go out and compete for the private educational monies that are out there. These individuals are nothing but wannabes. I never got into education to become wealthy. I did it for the love of knowledge and the love of watching learning occur in the faces of the beautiful students that come to school everyday ready to learn or not.(This is where Rhee and Klein would probably tell me that they don't give a crap,the love of knowledge is good and whatever...). I write this as an angry parent who has had to take his children out their own school system because this administration sucks at education. Why? Because educators no longer have any substantial input in the system which Bloomberg has hired Klein to dismantle. But no worries I too was upset when his majesty and his court pulled a fast one on the citizens of New York and their rights as voters. But now we see this (and I struggle to call him this), man, for what he really is. He will do anything to get what he wants. First he was a Democrat, then a Republican and now he is an Independent. First he was for term limits but then when they applied to him, he lacked the self confidence in his work over the last 7 years to trust the people of New York to decide if another term was in order. Let's wrap up this lil lesson with some Bloomberg math: 4 + 4 = 20 Billion. If the Mayor of New York was worth 4 billion dollars during his first term, then 20 billion after 3 years into his second term, how much will he be worth after buying a third one? Put that on a standardized test, and analyze that data. Keep up the good fight, this is not about me, you, Bloomberg, Klein or Rhee but about those that are yet to be, our children.