In Rochester, the clone wars begin! 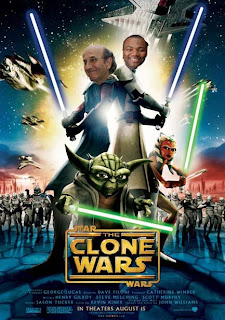 In today’s Rochester Democrat and Chronicle, Jean-Claude Brizard, formerly top administrator at Tweed and now the Superintendent of Rochester schools, responds to criticism that he has adopted NYC’s discipline code almost word for word – even though the code was supposedly prepared by a committee of twenty five Rochester citizens, including advocates, district employees, and others, with additional “input” from parents and students.
See the expose entitled Rochester School District adopts new discipline code:
“…the 24-page code, in the works for seven months, is almost a carbon copy of the discipline code introduced in New York City public schools in 2003.
The code contains a disclaimer stating that "excerpts" of it were adopted with permission from the New York City Department of Education, but a side-by-side comparison of the two documents shows they are virtually indistinguishable.
Rochester School District spokesman Tom Petronio acknowledged the similarities but said that after months of devising drafts of original documents based on elements of codes in New York City, Boston, Miami, Philadelphia and elsewhere, the district embraced the New York City code.
"What it ended up being after this process of revising and restructuring was that what New York had was largely what people wanted here," Petronio said. "That's fine because New York's is a well-respected plan."
The "Rochester City School District Regulations of Intervention and Discipline," as the code is called, was prepared by a committee of 25 people, including district employees and local youth advocates, with input from parents, students and district staff. It was implemented last week.”
Subsequently, an editorial in the paper, City School District's disciplinary code borrows too liberally, pointed out that this was plagiarism and set a terrible example to students and others:
“The new code, frankly, is in many places a word-for-word lift from the disciplinary code for New York City public schools…. Submit original work. And if it isn't original, use quotations and clear and direct source attribution…. Superintendent Jean-Claude Brizard should rewrite the existing disclaimer on the print and Web versions of the code to state that it was adopted with permission from New York City schools using, in many instances, identical wording and phrasing. Or something to that effect.”
Guess who was the sharp eyed reporter who noted the word by word steal from NYC? Bad luck for Brizard is the fact that David Andreatta, formerly of the NY Post, is now working for the Rochester paper and clearly knows his way around the DOE website, where the disciplinary code can be found.
See Brizard’s response, Praise city schools for adopting what works, in which he argues that the NYC disciplinary code is so perfect, and nearly everything else that Tweed has done is similarly successful, including our graduation rates, etc. etc., why shouldn't he adopt our code word for word, and that “Team members in New York City hosted our team and were technical advisers during the creation of a safety infrastructure.”
He also writes, in his defense:
“I am a Broad Fellow, part of the Broad Superintendents Academy started in 2002 to transform urban school districts into effective public enterprises. I'm also a former New York City Department of Education regional superintendent and policy executive.”
What’s most disturbing is not just that Brizard is copying word for word the flawed DOE regulations, but that he had originally claimed that it was the collaborative product of local staff, advocates, parents, etc – when clearly, they must have had absolutely no input at all.
Tweed has trained lots of officials in its top-down management style, who impose their rigidly ideological policies no matter what the consequences, while often claiming that their decisions are the result of real consultation with stakeholders. They are now wreaking the same sort of damage in districts around the country.
If the Rochester papers are any indication, perhaps the editorial boards elsewhere are not as prone to defend whatever nonsense the district leadership wants to propound, as unfortunately appears to be the case here in NYC, but has maintained their independence and a healthy skepticism.
Let the Clone wars begin!
Posted by Leonie Haimson at 11/20/2008 12:22:00 PM