DOE to Kids: Shovel It 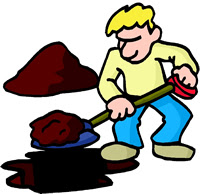 September 21, 2007 (GBN News): A controversial new plan by the NY City Department of Education to have children bury their cell phones outside before entering school buildings has been coming under increasing criticism. The DOE plans to engage an outside vendor to rent shovels to children for what it terms a “nominal fee” of $1 a day. Many City Council members and parent advocates termed the proposal “ridiculous”, but Schools Chancellor Joel Klein and Mayor Bloomberg held their ground, so to speak. Mr. Klein acknowledged that the cost of renting shovels could be a burden for some families. The Chancellor told GBN News that the DOE is considering a compromise whereby the children would be allowed to provide their own shovels. However, he said that since the shovels are potentially “dangerous implements”, they could not be brought into the school buildings and would have to be buried alongside the cell phones.
Posted by Gary Babad at 9/21/2007 10:54:00 AM

Are you kidding me? I can't tell if this is a joke.

When are we going to demand these twisted surrealist political appointees to resign?

Are we getting nearer to taking some real action yet?