Our kids being cheated out of smaller classes, yet again

This week the NYC Independent Budget Office came out with new class size figures, showing that class size reduction has slowed to a crawl, due to the city’s refu 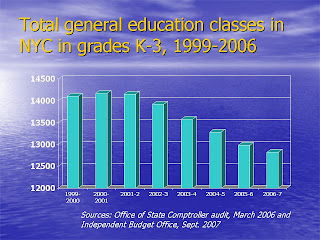 sal to maintain the number of classes offered in K-8.(Click on the graphs below to enlarge them.)

Clearly, the Department of Education has to work far harder to improve opportunities for our children, particularly in the context of the new state law that requires them to do so.

For seven years, the city has received almost $90 million in state funds, intended to reduce class size in the early grades to 20 or less. Yet a 2006 audit from the State Comptroller’s office criticized the DOE for only creating 20 extra classes in grades K-3 in the year 2004-5, instead of the 1586 classes the city had claimed. This new data shows that the situation has gotten much worse. Far fewer classes have been offered in these grades each yea 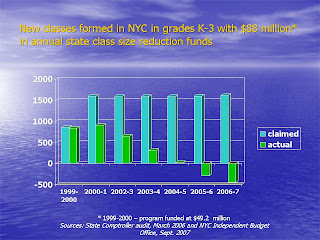 Last year there were 446 fewer classes in grades K-3 than before the state-funded class size reduction program began – and more than 2,000 fewer classes than DOE claims to have created with these funds.

The same is likely to occur with the new state funding that is supposed to be used to reduce class size in all grades, without much more rigorous accountability, oversight and compliance.

For more information and an excel file showing the class size averages in each school district in the city for the last two years, go here.