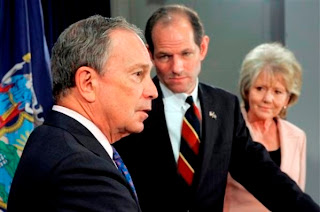 
This quotation suggests that the mutual lovefest between Spitzer and Bloomberg may be over – which is important given the influence of the Governor over education funding and the future of mayoral control in NYC.

The context was Bloomberg’s opposition to Spitzer's proposal to grant driver licenses to undocumented aliens – but the same statement could be made of the Mayor's educational policies as well.

Email ThisBlogThis!Share to TwitterShare to FacebookShare to Pinterest
Labels: Spitzer on Bloomberg, wrong at every level