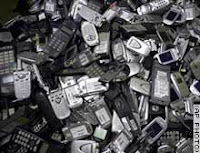 A follow up to yesterday’s Forest Hills HS scanning story:

1) My co-worker, whose son’s phone was confiscated in yesterday’s scanning, spoke to another parent while they sat in the auditorium this morning awaiting return of their kids’ phones. That parent related how last year her daughter was almost abducted after school by a man in a car. She was able to get away and call for help on her cell phone. This parent said she was terrified at the prospect of her daughter traveling without a cell phone after this trauma, and doesn’t know what to do now. Perhaps the Mayor can send his limo to pick her up every day.

2) Here is what my colleague reports about the raid, for the benefit of those of us who have not yet had this unique DOE educational opportunity:

Thank you, Mayor Bloomberg, for making sure our kids are not distracted from their learning!

My son's school went through this, last year and along with a massive amount of cell phones they took children's belt buckles, protracters, scissors for art and a trumpet. The line to enter the school was very long and children missed classes.
The kids were humiliated and upset. My son commented that he is treated better at the airport.

I guess they'll be scanning elementary schools next. I hear there's a real scissor problem there.

My daughter is a junior at Forest Hills HS. She just transferred over from parochial school. While I am, so far, very happy with Forest Hills HS, I am second-guessing my decision after my daughter informed me that masses of NYPD officers forced her and hundreds of others to hand over their cell phones, phones which we as parents pay for so that our kids
can get in touch with us in an emergency. It seems her civil rights were violated to say the least. To make matters worse, being new to the public school system, we were NEVER informed that this policy even existed.

To add insult to injury, when I contacted the Chancellor's office after my daughter called me at work when she got home, nearly in tears, I was told by the Chancellor's representative, when I pressed her for an explanation of the thought process behind this strange policy "I don't have time to stay on the phone and talk to you - call 311" and she hung up.

To say that I am appalled would be an understatment.

Not allowing children in nyc public schools to carry cell phones, especially children who are younger 11, 12 and 13 years old who travel to and from on nyc public transportation is a recepie for disaster for nyc doe. There are many scenarios, what if a child is to wait for a parent or guardian and that person gets tied up and cant make it in time, what is that child going to do, use a crystal ball? It is dangerous and a lawsuit waiting to happen. The NYC DOE should not open the door to potential liability and keep the safety of children in mind. A few bad apples are making it unsafe for all and that just isnt fair. I make my daughter take her phone to school and if they say anything to me, let them, I dont care, I will defend her right to have her phone.

I teach at Forest Hills High School. I sympathized with the parents of our students on that '9/11 scanning day' since I am also the parent of an NYC public school student. I send my daugher to school with a cell phone since she goes and comes from school by bus and I must be able to reach her if an emergency arises. One day she did miss her bus and I was on the phone with her until I left work and arrived at her school to pick her up. Parents in the suburbs and in private schools would not tolerate being unable to reach their child when necessary.