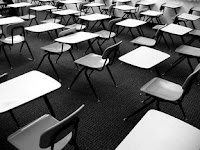 September 16, 2007 (GBN News): GBN News has learned that contrary to critics’ claims, the NY City Department of Education does not need to come up with a plan to reduce class size, because it already has one in place. The DOE policy is called “Unannounced Scanning”, and, if the experience of at least one high school is any indication, it has lowered class size significantly. At Forest Hills High School, attendance during a metal scan for cell phones last week was down 9.7 per cent, which resulted in a commensurate reduction in average class size. The DOE presumably hopes that if these figures can be replicated throughout the system, they will finally be compliant with state law.

Schools Chancellor Joel Klein, when reached for comment, said this proves that the DOE is responsive to parents’ concerns, as expressed in a recent survey. Mr. Klein admitted that the parents at Forest Hills High School made “smaller classes” their top choice in the survey, and acknowledged that the school was chosen for scanning on Tuesday in response. He also noted that “better communication with parents” was the parents’ next preference, and said, “What better way to communicate our concern for parents’ wishes than an unannounced metal scan?” Mr. Klein also pointed to a tremendous increase in parent involvement, when the next day hundreds of parents appeared at the school to retrieve their kids’ cell phones. “And we didn’t even have to pay them”, he said.
Posted by Gary Babad at 9/16/2007 10:16:00 PM