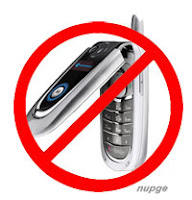 September 10, 2007 (GBN News): Mayor Bloomberg, in criticizing today’s override by the City Council of his veto of a bill guaranteeing children the right to carry cell phones to and from school, cited a recent Education Department survey to bolster his hard line against cell phone possession. “Not a single parent”, the Mayor said in a City Hall press conference, “chose ‘more cell phones’ as the most important improvement they would like to see in the schools.” Mr. Bloomberg also said that in what he termed a “surge” aimed at eradicating cell phones, school security chief Emomali Rakhmon plans to add 30,000 more school security agents to enforce the ban.
Posted by Gary Babad at 9/10/2007 07:00:00 PM

He said it again -- that parents want their kids to carry cell phones just "to find out whether they want fish or beef for dinner."

What's with this guy?

What't the matter with him? Is he anti-pasta?