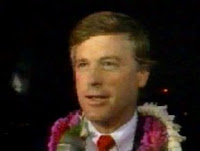 September 23, 2007 (GBN News): The NYC Department Of Education announced today that former Vice President Dan Quayle will become the DOE’s new “Diversity Czar”. The position is being created to address charges that groups making up a major portion of school enrollment are vastly under-represented at the DOE. For example, there were reportedly so few Latinos in the Office of Parent Engagement that the DOE was said to have represented a native of Curacao, a Dutch territory, as a Latina because she spoke Spanish. Mr. Quayle admitted that simply speaking Spanish does not qualify someone to represent the Latino community, and the former Vice President pledged in a statement, “That’s why I’ll be looking far and wide to find people who actually speak Latin, to truly represent that community at the DOE.” A DOE spokesperson praised the new Diversity Czar, who as Vice President once said, “I was recently on a tour of Latin America, and the only regret I have was that I didn't study Latin harder in school so I could converse with those people”. The spokesperson said that Mr. Quayle seemed the obvious choice for the DOE due to his “longstanding experience in the area of cultural competence”.


Ed. Note: If this sounds far fetched, follow this link to a Word file containing testimony given before the NYC Council Committee on Education. A read of this devastating testimony suggests that a Quayle appointment such as the one suggested in the above parody would not be out of character for the DOE. As Mr. Melendez stated to the Council, “The DOE has demonstrated, not just in the Latino community, that it is well below standard in Cultural Competency”.
Posted by Gary Babad at 9/23/2007 09:19:00 AM