Yet another contaminated high school? 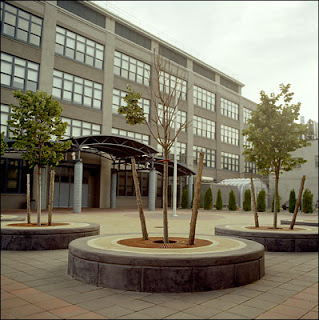 Fox News carried a very scary story last night, about the toxic contamination at the Information Technology HS in -- and the lack of action by the DOE to do anything about it.

$20 million of our tax dollars went into converting a former metal-plating factory into this school– with the building still being leased from its owners at more than $1 million per year.

Through documents obtained through the Freedom of Information Act, Fox News found out that the contraption built to vent the toxic fumes outside the school (see the white tent-like object at the right of the school in the photo above) is actually bringing more contamination inside – and consulting engineers on the project have advised officials to shut it off. Yet the Dept. of Environmental Conservation and the School Construction Authority refuse to address this issue.

The building also houses a school for special needs children.

As Dave Palmer of NY Lawyers for Public Interest writes,

"This disturbing report suggests what many of us have feared: that DOE and SCA are incapable of ensuring the safety of children, teachers and community residents when they choose to build schools on contaminated sites....This should not be allowed to happen."

The administration's chronic and apparently deliberate practice of siting schools on contaminated sites, with no public review or oversight, has been noted previously on the blog, here and here.

Hopefully, this will strengthen the position of Dave and other environmental advocates who who have been pressing for more community and City Council review of leased school sites.

Surprise, Surprise, did you see the news reports today. The Bloomberg Administration has hired a top criminal attorney to represent the city in the on going investigation regarding the death of two NYC firefighters. Why do you suppose they did that?? ACCOUNTABILITY??? The arrogance of this mayor and all of his subordinates is unbelievable.What makes you think they care about the health and welfare of NYC students or citizens. FOLLOW THE MONEY that is why the construction is allowed to continue without real public scrutiny. Yet, the polls say the mayor is quite popular. Maybe you can fool all of the people all of the time.

Shame on State Senator Frank Padavan who backed out of his promise to close the school site leasing loophole that Assemblywoman Nolan sponsored and passed in the NYS Assembly. Padvan is singlehandedly responsible for putting our children at risk and in harm's way.