Setting the record straight; why NYC should not win the Broad prize 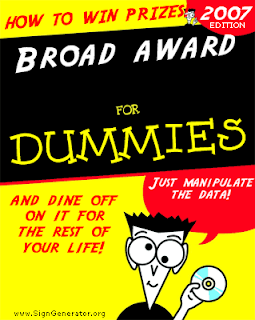 It is widely expected that after being nominated three times, NYC will win the Broad prize tomorrow for most improved urban school district. We faxed the following letter to the foundation today, to set the record straight.

We urge you not to award the Broad prize to NYC this year. As parents and teachers, we have witnessed one incoherent wave of reorganization after another over the last five years, leading to unnecessary chaos and in many cases, disruption of educational services. None of these changes have been planned or undertaken with any consultation of the stakeholders in the system.

In the first phase, when districts were dissolved and schools placed into regions, a year went by when thousands of special education students were denied referrals and/or essential services. Now regions have been dissolved, and districts re-instated, but without the ability or manpower to supervise and provide support to individual schools. More recently, the Department of Education instituted bus route changes in the midst of winter, which left thousands of shivering children in the cold, and others as young as six years old who were given Metro cards and expected to take the subway by themselves.

Instead of transparency and accurate information, we get spin and PR. Though overall, the amount spent on education has risen, there is no evidence that a larger percentage of resources has gone to the classroom, despite repeated claims by DOE. Instead, each year the headcount grows of highly paid officials at , as well as the number of multi-million dollar consultants.

Though test scores have risen, a careful examination shows that for the 4th and 8th grade state exams, there was more growth during the four years before the administration’s reforms were put into place than in the four years since. Moreover, as recent news reports have revealed, the 4th grade exams in both ELA and math were much easier in 2005, when the largest gains in NYC performance occurred, putting into doubt their validity.

And while the city claims a rising graduation rate, the way in which the DOE calculates this rate excludes thousands of students “discharged” from the system to GED and alternative programs each year, none of whom are counted as dropouts. What is most disturbing is that the number of these students continues to rise, as the City Comptroller has pointed out. Without fully accounting for the fate of these students, as the DOE refuses to do, there is no way to assess whether graduation rates have actually improved. Even according to DOE’s own unreliable calculations, the six year graduation rate is no higher than it was in 1996.

With nearly every change they have made in recent years, this administration has ignored the input of parents, and continues to show its contempt for our concerns, including the need to communicate with our children before and after school and help ensure their safety through the use of cell phones. Though the City Council has passed a law that would allow students to carry cell phones to and from school, the administration has said they will not comply with this law, since they claim unilateral authority when it comes to our schools.

The DOE is similarly scornful of the legitimate desires of parents for their children to be educated in smaller classes. This was the number one priority of parents in the recent DOE survey, though the administration continues to attempt to obscure these results. Our classes remain the largest in the state by far and some of the largest in the nation, without any significant improvement in five years. The State’s highest court concluded that class sizes were too large to give NYC children their right to an adequate education, yet in 2006, an audit showed that the city created only 20 additional classes with $90 million in state funds meant to reduce class size. Despite the audit’s findings, the DOE has refused to adopt any of the recommendations of the State Comptroller to improve compliance.

On your website, you have said that you will take into account the views of stakeholders, including parents and teachers, in awarding the prize. We urge you to consider these facts, and withhold this award from the NYC Department of Education until it is more legitimately earned.

Yours, fifty one NYC parents and teachers

If we do win I'll bet not one news org will question the fact that ALL the criteria being used to judge us is currently embroiled in scandal. It's kinda scary when everything is under question and almost no one seems to notice or care? I use the word scandal but it sure doesn't really seem like one to the media. Am I missing something? Why does the media let BloomKlein get away with this BS?