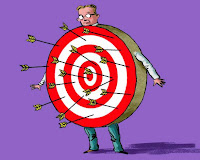 On Thursday, September 13, the Queens Chronicle ran a story by Colin Gustafson entitled, "Parents Give 'A+' To Teachers But Low Marks On Class Size." To the Chronicle's credit, the story summarized fairly accurately the recently announced results of last spring's DOE Parent, Student, and Teacher surveys. In particular, Colin Gustafson noted properly that nearly 25% of parents who responded indicated that smaller class size was their highest priority improvement while the DOE has "cobbled together" data from four different categories to claim higher parent priority for an amorphous (and hard to reject) entity called "more or better programs."

Unfortunately, the Chronicle story rather missed the mark in its statement about parents' responses concerning standardized testing. As Mr. Gustafson wrote, "...only 1 percent believe schools put too much emphasis on standardized test preparation — a finding that has startled many of the mayor’s most ardent critics on education policy." Aside from the fact that note such critics were mentioned by name, the most startling aspect of this observation is the conclusion itself.

The Chronicle's interpretation of this result is incorrect in several respects. First, 100% of responding parents did not comment at all on their attitude toward standardized testing -- they were never asked about this issue on the Survey. The 1% response simply represented the group of parents who perceive reduced test preparation time as the single greatest improvement they would like in their children's schools. To infer that this 1% response level reflects the prevailing attitudes about standardized testing among the nearly 217,000 parents who responded is invalid and devastatingly misleading.

Second, the DOE Parent Survey question is precisely worded as "more (or less) preparation for state tests." This choice presumably refers to New York State 3rd through 8th grade Math and English tests and Regents exams for high schoolers. NYC parents were not widely opposed to the State's original 4th and 8th exams or Regents exams. However, by referring to this question as having addressed "standardized tests," Chronicle readers are being further misled. They are asked to believe that there is virtually no parental objection or concern with respect to the batteries of 3rd through 8th grade high stakes grade level exams introduced in the last few years or the even more intrusive intrayear exams the NYC DOE plans to begin implementing this year. To the contrary, there are many parents concerned with the dramatically increased testing regime, the planned use of such test scores for student, teacher, and school evaluation, and the loss of true educational time and content as teachers feel more and more pressure to "teach to the tests."

All is not well with the state of standardized testing in NYC public schools (check out the Time Out from Testing website at www.timeoutfromtesting.org), and the degree of dissatisfaction is likely to swell to all-time highs once parents actually see their children subjected to as many as 20 more standardized tests per year (five each in math, English, science, and social studies). To suggest otherwise from the Parent Survey results or elsewhere is to misrepresent seriously the concerns of many parents. If a full explanation of the DOE testing program had been coupled on the Parent Survey with a direct question asking whether parents wanted more time or less spent on standardized test preparation, one can safely assume that well more than 1% of parents would have opted for less time.
Posted by Steve Koss at 9/13/2007 07:48:00 PM