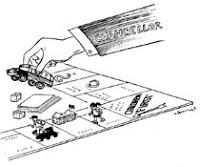 November 13, 2007 (GBN News): The game company Parker Brothers announced today the long-awaited update to its popular game, “Children First: A Game Of Irony”. The game, which has drawn a devoted following in New York and around the country, is based on the NY City school system. However, Parker Brothers has had difficulty keeping the game realistic and up to date given the frequent and massive changes in the city schools.

For those unfamiliar with the game, it is similar to Monopoly, with a few unique features. The winner is the player who amasses the most points, which are known as “test scores”. One player is designated “Chancellor”, and is similar to the banker in Monopoly but disburses money only in the form of no-bid contracts. The “Chancellor” also has the right to change the rules at any time, especially in the middle of a turn. Players draw cards such as: “Advance token to the nearest ‘failing school’. If unowned, you can buy it from the DOE and turn it into a charter school”; or, “Go to rubber room. Go directly to rubber room. If you pass ‘Go’, collect $200 but lose an indefinite number of turns”.

The new version of the game looks similar to the original one, but players are now scored on the basis of letter grades instead of numerical values. As in the original game, “test scores” are used, but points scored in the game, called “performance”, only count directly for 30% of the letter grade. Another 55% of the grade, called “progress”, comes from improvement in “test scores” since the last time the game was played. The remaining 15% comes from the “game environment”, determined by how frequently players show up at games, as well as by how the players rate each other in surveys that they are required to fill out.

Scoring is very simple: In the computer version of the game, the “Chancellor” enters the game data and clicks on a button labeled “ARIS”. The computer will then turn out a randomly generated "grade" for each player. In the board version, the “Chancellor” decides what letter grade each player will receive on the basis of an arbitrary manipulation of the data. Players can appeal their grades, and the “Chancellor” will approve appeals based on players’ political clout and their willingness and ability to follow the “Chancellor’s” ever changing rules.

A Parker Brothers spokesperson, Brad Milton, expressed the hope that the updates will add the same exciting new twists to the game as the most recent “reforms” have done for the actual school system. Players, he said, will experience the “high stakes” thrill of the DOE, as all it takes is one “F” score for a player to be “fired” and not allowed to play in any future games. Moreover, players will be “empowered” to develop entire new strategies, just as principals do at the DOE. For example, players might try not scoring too many points in any one game, so as to make “improvement” more likely in the next game.

The new version of “Children First: A Game of Irony” will retail for $39.95. The computer version, which includes a complete ARIS system, will remain at $80 million. However, for current owners of ARIS, the game can be purchased separately for $29.95. An update to the national version, “NCLB: The Game”, will be out in the near future.
Posted by Gary Babad at 11/13/2007 08:30:00 PM