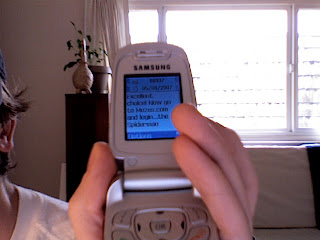 See the article in Advertising Age, revealing a new twist in the DOE project, originally devised by Roland Fryer to offer cell phones to students, supposedly as an incentive to improve their academic performance.

It’s now being branded as “The Million program” – referring to the 1.1 million students in the NYC public schools. This proposal was originally described as an “experiment” but is now said to involve 10,000 to 11,000 students in its first year alone - and is apparently being pitched to potential sponsors as a way to market their products to all NYC students in the near future.

According to David Droga, an ad maven involved in the project, who revealed details to Advertising Age's Idea Conference last Thursday,

“There'll also be some room for advertising on the phone. After all, the phones, while provided for free to the students, won't be completely without cost. As such, marketers will be able to infiltrate the students' world through "responsible" sponsorships….There's lots and lots of brands out there that have a place in the students' lives," said Mr. Droga, who wouldn't disclose the specific advertisers because of ongoing negotiations.”

There may also be product “discounts” offered in text messages, according to Droga – a good way to sell more products.

So let me get this straight: this administration will continue to deny cell phones to students who need to communicate with their parents on their way to or from school, or in case of an emergency. But they will be offered as a way to sell them products?

This project is quickly turning into a potential goldmine for some lucky advertising agency as well as a host of possible commercial sponsors, and yet another opportunity to drain the pockets of NYC kids and their parents.

The possibilities being tossed around by politicians and bureaucrats for education-department sanctioned, privately sponsored cell phones and service for public school students keep getting stranger and stranger.

My daughter travels to and from school by subway every day and her cell phone is my lifeline to her— I don't want a Department of Education distribute cell phone -I just want her to be permitted to carry her cell phone each day (school days, weekends and holidays). Between the suggested text messages to students from celebrities and now the advertising targeted to students - I believe both the mayor and his chancellor have gone off the deep end.

This is making me ill. Remember the Snapple machines that were put into schools in 2003? I think it was a no-bid contract as well. The pitch was that they were supposed to be healthier than other drinks, but what was really important to Snapple was the exclusive visibility of that particular brand, which over time gets really imprinted into the kids' brains.

Something else that gets imprinted over time are the newspapers, which are left at the door so kids can take them free of charge when they enter the building. That's another habit in the making for later-in-life purchasing. The kids go for the Post and the Daily News because they are easier to read than the Times, and more salacious. Now there's a nice habit to create in a young mind: a morning dose of stories about killing, abuse, bad behavior, and sexual come-ons.

It feels as if the schools are turning into a veritable treasure trove for corporate marketing strategies.

Nuts. Cell phones for kids should be for safety only. Hey why not buy every student an expensive iPhone while we're at it?

ok so here is my take on the issue. i feel that bribing the kids with cell phones isn't the solution to making them do better in school. Some of the kids are doing enough work as it is. its not fair to some so the ones who already do their work and now have to do extra just for a phone THE SCHOOL is giving them. its jus unfair.

im a kid and i think this wud b kool. the only problem is that we STILL cant bring them to school.

okkk this is what i think about the million program, i think that it is a very good idea, when students get rewarded for doing good in school by getting a FREE phone!!! this is something that not only ever student dreams of but every parent as well, i think the thought of getting a free phone will motivate he students to do good in school

Million is da bomb. kids will do better and parent don't have to buy their kids cell phone. it saves money and its a hot phone.

to all you anonymous peopke who think this is a good idea. think again. do u really want to be bribed with a phone wen u might already have one. think about it... thye might b giving you point and minutes but wat r u going to do with it when you leave? how are you goin to esarn point and minutes??? the phone will become useless.

I think this program is stupid. What's the point of giving away cell phones if you can't have them in school. This program is bribing kids to work harder. The program will fail horribly.

I think this program is stupid. What's the point of giving away cell phones if you can't have them in school. This program is bribing kids to work harder. The program will fail horribly.