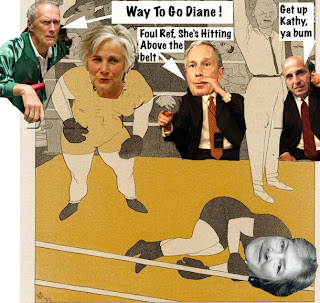 Though at first it seemed shocking that the administration would try to stamp out dissent by taping Diane Ravitch at speaking events, developing the sort of research file on her that candidates create on their opponents, and then having Kathy Wylde of the NYC Partnership try to smear her in an oped in the NY Post. In retrospect perhaps it’s not surprising at all.

Bloomberg and Klein run their respective fiefdoms as though they're involved in a non-stop political campaign. Many of the top officials in the Mayor's cabinet are PR people rather than policy experts – including most of his deputy Mayors. And as we know, Klein has the most extensive -- and expensive --PR staff in city government, short of the Mayor.

And while both of them may pretend that they believe in competition, clearly they only allow this notion to prevail when it means leaving schools, and students, to succeed or fail on their own, without throwing them a lifeline. When it comes to their own turf, they refuse to allow the sort of free exchange and expression that real democracy depends upon.

As Leo Casey writes in Edwize: “It seems that for some, markets should rule all education — except for the free marketplace of ideas. There, their monopoly must go unquestioned and uncriticized.”

Remember how Bloomberg won office in the first place– not on his qualifications or political experience, which were nil, but because he was able to use his own personal fortune to ruthlessly dominate the airwaves? In 2001, he spent a record $71 million; even though early in the campaign, he himself said that spending more than $30 million would "look obscene." He went on to spend more than twice that amount.

Four years later, even though he was the heavy favorite in the race, he broke his own record --- spending $78 million, more than any other nonpresidential campaign –nearly ten times as much as his opponent, Freddy Ferrer. During the 10 days before the election, he spent $12 million, mostly for television, radio and newspaper advertising.

Now, whether its our taxpayer money going to develop dossiers against dissenters, or persuading charities that were originally set up to help the public schools (the Fund for Public Schools) to spend millions more to burnish his image by spreading disinformation, precious resources that should have been devoted towards improving education for our kids is being diverted – and perverted – into his narrow political ends.

Only in this case, the good guy won, and rather than besmirching Diane’s reputation, the administration has sullied their own . No one seems to have told these bullies that you don’t treat a national treasure like Diane as you would a political foe.

Commentators of every political stripe have come out in her defense. Not that she needed them. First, you must read Diane’s eloquent response in the NY Post.

Also, the Daily Kos, Steve Koss in our own blog; Sol Stern of the Manhattan Institute, the National Review, Eduwonkette, Education Notes, and Gotham Gazette : all of which decry Tweed's underhanded tactics to suppress dissent.

The only person not in his payroll of the Mayor who seems to support the administration is Whitney Tilson, former hedge fund manager and charter school proponent.

Last but not least, check out one of my favorites -- The Neighborhood Retail Alliance:

The real issue here, and its one that we've commented on before, is the way in which the DOE acts more like the DOD in its ruthless approach to dissent. …It is, as Ravitch, Sol Stern and Andrew Wolf have all pointed out, the way that an agency behaves when it has a good deal to hide. It is an agency that will go to great lengths to do bureaucratic sleight-of-hands, and when that doesn't work on seasoned educational experts, the agency will bring out corporate toadies to do ghost-written character assassination.

Thanks to David Bellel for the illustration. Yes, that’s Kathy Wylde down for the count.

I think Diane said it the most eloquently of us all when she wrote in the Post that "Wylde...apparently believes public engagement is an encumbrance to public education." What a marvelous summary of the Bloomberg/Klein education regime!!

While I fully sympathize with Ms. Ravitch against the minions of Tweed, I find it disturbing that you cite Leo Casey.

Mr. Casey does not hesitate to slime his critics. He accused a UFT opposition group of nazism, and publicly libeled me, crediting me with a statement that was made by the LA Times editorial board and accusing me of "making up facts."

Mr. Casey expresses great outrage at those who practice character assasination, but has no hesitation vilifying working teachers,whom he ostensibly represents.

The failure to fully examine issues is precisely what's allowed this mayor's "reforms" to gain widespread acceptance. People who read the tabloids think class sizes are lower and schools are much better. It behooves us to look at the big picture and choose our role models very carefully.

Anonymous said...
This comment has been removed by a blog administrator.
November 2, 2007 at 5:20 PM

Diane is the most qualified and knowledgeable commentator on public education in the USA. She's totaly objective, articulate, insightful and accurate. And Wylde is what...? I have no idea.

I agree, Diane is a very good commentator on public education in the USA. And who is that Wylde?

Billionaire Bully......Reminds me of Trump!!!