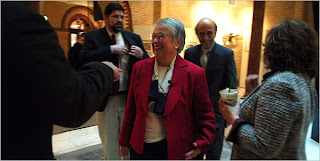 In a 2003 article published in Business Week about the reinvention of our schools Carmen Fariña, then a regional superintendent, commented:

"Jack Welch said one thing that really struck me…You can't allow an organization to grow complacent. When you find those kinds of organizations, you have to tear them apart and create chaos. That chaos creates a sense of urgency, and that sense of urgency will ultimately bring [about] improvement."

This quotation was included in testimony I delivered in the fall of 2004, during hearings held by then-Manhattan Borough President Virginia Fields on the first phase of the Children’s First reforms. I was describing the free-wheeling attitude of the administration and the theory of “creative destruction” that was supposed to revolutionize education in this city, popularized by Jack Welch, former president of GE and the McKinsey consultants who were brought to DOE by Klein to bring change. They decided to dissolve the districts, and create the regions that would take their place, an decision which in turn, led to thousands of special education students being deprived of services and referrals for more than a year.

The regions are now gone, replaced by an even more inchoate management and organizational structure. Carmen Farina was subsequently promoted to Deputy Chancellor for Teaching and Learning after Diana Lam left in disgrace; she lasted two years, until retiring in April 2006, to be replaced by Andres Alonso, who has since departed for .

Klein may have endured longer than most modern Chancellors in the city’s history; but the top educator post in the Department has been a revolving door, reflecting the rapidly changing fads and fashions in the methods and theories of reform attempted by this administration.

“complacency is not the same as complicity in how to evaluate schools. The problem with the report cards is that they leave out the human touch from evaluation and evaluating the caliber of teaching. I am not for any report that focuses only on grades since most of us know a complete education for our children includes critical thinking, problem solving, humane education and writing skills. None of these are possible with this evaluation. Hopefully parents can see beyond the reports and evaluate for themselves how their own schools are serving their children. the people who are giving greatest credence to these reports are those who do not have children in our schools. My favorite choice for Charlie right now is not an A school but one that strikes the balance of all important issues and respect the development stage of his growth. It is also does not stress test prep. Don't know who is quoting me out of context but feel free to put this quote on blog.”

When I first brought up this Carmen Farina quote (see #5814 ), I even said Leonie's paragraphs in her 2004 testimony should be quoted more than once. And so they have been. And so they should be.

I also wrote at #5832:
Reading all these emails about the exclusion of charter schools in the evaluations should be just another wake-up call.

After quoting Leonie's 2004 testimony (Creative destruction, message #5814), I traced some other articles back to when the chancellor was appointed. The few that I quoted in something I wrote a couple of days ago (here) are just the tip of the iceberg.

We need to get come to grips with the situation and restore genuine education.

As a classroom teacher, I have seen the devastation over the past decade through the work of administrative non-educators who make decisions that hurt children.

Kids do not think well. They sit back and feel they are to be "fed" everything, they don't actively seek out information or learning. They don't know grammar, too many can barely write (a few can follow a rubric for writing, but only just). Math? If I said their handling of fractions in h.s. classes is minimalistic, I would not be exaggerating.

See Frank Rich in the NY Times: "The Coup at Home", who calls the Republican takeover what it is (something many people, including myself, have said this for years now). It's the same thing in New York. It's a coup, and it's hurting us as a citizenry.

Klein has endured simply because his function is no longer that of an independent leader, but a reliable rubber stamp.

I recently had to get a form signed by the superintendent. Months later, no one in my building even knows who it is.

Carmen forgot to mention that Jack Welch was proud of and known for creating a climate of fear at GE by firing 10% of employees to keep the others on their toes. This kind of culture is the exact opposite of what we need in our schools.

The fact that Klein chose Welch to set the tone for the principals' training school should have sent alarm bells throughout the school communities.

While I appreciate the concept of "creative destruction" I think it's somewhat an oxymoron. I would prefer the term, “Shock Doctrine” (light?). As a social studies teacher I make it my business to study larger trends of societal transitions. There’s a new book called the “Shock Doctrine” by journalist Naomi Klein (http://www.naomiklein.org/shock-doctrine). While the goal is to create a new order, it must do so by placing the population in a state of shock, much as a psychiatric patient is through electro-shock therapy, to make him/her pliable to change. The shocks can be contrived or provided by nature. An example of the former would the coup in Chile, and the destruction of the Soviet economic system to introduce radical free market capitalism. Hurricane Katrina provides and example of the latter, allowing the push through of charter schools and gutting of the teachers union there. Klein goes on to mention in her book numerous other examples.

I think it’s plausible that what Chancellor Klein and Mayor Bloomberg are trying to do is an adaptation of that Shock Doctrine light policy on our schools. Welch setting the tone for fear and intimidation, teachers losing due process rights and seniority transfers, new budgeting rules that will discriminate against experienced teachers, the summary firing of BOE staff to erase institutional memory, the movement toward merit pay schemes (currently in the school bonus phase); when taken collectively have put teachers in a state of shock. For the kids we have seen the end of social promotion, increased testing in the name of “accountability”. Parents have never seen an education regime that was as unresponsive. Add to this an effective PR machine of the DOE of cooking graduation numbers and having phony town hall meetings where the Chancellor is not taking questions and parent/teacher feedback is ignored and you have the softer side of this policy of destruction.
It’s apparent to this teacher that a new education paradigm is emerging for NYC kids. Not all kids, as those in the elite schools will be protected. It’s a paradigm that fits a nation with a shrinking middle class; where the new schools system of scripted teaching temps and test-driven curricula are to produce citizens without the capacity to think critically but instead follow orders and carry out narrow specific tasks to fulfill the roles of: clerks, ground level law enforcement, military and other lower-level technical jobs. You won’t see such a paradigm shift in the affluent suburbs, nor for our elites in Stuyvesant High School or the other institutions elites send their children to.

What will be interesting to watch is if the new regime that will take over from where the Mayor has left it will continue this march toward developing a lower caste educational system; where the assault on the teachers union and weakening of the public school system will produce a mechanistic and reductionist “free market” model of education. Could this happen under a Democrat mayor?

Carmen Farina doesn't deserve to be treated as any kind of hero. She's just as guilty and she got a hefty pension to boot.

Carmen Farina was a fierce defender of Jolanta Rohloff the former principal at Lafayette High School. In fact, she was an honored guest speaker at the last Graduation prior to the DOE phasing out the school. Just yesterday, the New York Post did an interesting story regarding the Elite Principal Academy. It seems that they have done quite poorly. In fact Jolanta Rohloff was the example of a failing principal. President Weingarten is quoted as saying she was "unfit to lead". I guess we all were wrong. She was the proptypical academy principal. She caused more than enough chaos and was the final nail in the coffin of the once proud school. Carmen Farina's grandson (Charlie) should never have to endure such an educational environment as did the students and staff at Lafayette.
Rick Mangone