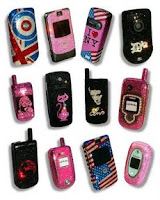 November 2, 2007 (GBN News): A plan currently being considered by Mayor Bloomberg and the Department of Education to offer cell phones as rewards for high performing students may have hit a major stumbling block. While the belief at the DOE is that the cell phones would be an effective incentive for children to learn, they cannot be handed out to children in school without running afoul of the Mayor’s school cell phone ban.

Sources at the DOE told GBN News that the Department is considering several ways of getting around this problem. Some officials suggested having the children pick up their reward at local bodegas instead of at their schools, for a nominal $2 fee. Others favor burying the phones outside, and having the prize winners dig them up after school. The solution that the Mayor is said to prefer, however, is a “zero tolerance” policy whereby the phones would be given out at school, but they would then be immediately confiscated. “Schools are for learning,” the Mayor reportedly said. “And the lesson they’re going to learn is that no matter how they get them, no cell phones means no cell phones.”
Posted by Gary Babad at 11/02/2007 05:30:00 PM