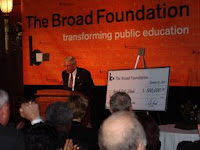 November 17, 2007 (GBN News): The Eli Broad Foundation announced today that it is offering a $100 million endowment to any university that establishes a Bachelors degree program in High Stakes Test Taking. The foundation hopes to capitalize on the test taking skills that the nation’s schoolchildren are developing under No Child Left Behind, and to insure that those skills will continue to be useful as they move on in life.

Foundation Chairman Eli Broad indicated that he expects New York City to be a rich source of degree candidates who will flourish in the new program. “Due to the brilliant leadership of Mayor Bloomberg and Chancellor Klein, the city’s students have been uniquely prepared for advanced education in high stakes test taking,” Mr. Broad proclaimed. “Why, they’re so good at high stakes tests that when they take a ‘low stakes’ test like the NAEP, it’s obviously so trivial to them, they don’t even bother to do well.”

Mr. Broad said that the degree program will counter the claims of those “naysayers” who maintain that high stakes testing does not prepare students with the skills they need later in life. He said that if, as he expects, the Bachelors degree program is successful, he plans to provide funding for Masters and Doctoral level programs as well. And, he said, “We are even prepared to fund challenging new jobs in the high stakes test taking field, to prove once and for all that students can go on to lead successful lives after spending their entire education on test prep.”

In other education news, Chancellor Klein personally handed out cell phones to the first class that qualified for his new “reward for performance” program. In an embarrassing glitch, the Chancellor quickly ran out of phones. Apparently, he was unaware of the number of children in the class, since the DOE had delayed the City Council mandated release of its class size figures. It all evened out, however, when school security officers immediately confiscated the phones that the Chancellor had distributed.
Posted by Gary Babad at 11/17/2007 01:52:00 AM

I love reading this blog. Keep up the great work!

You outdid yourself this time, Gary! Perhaps we can get Broad to pick up the idea...they've funded worse!

wow, I'm new here, but that was just great...best laugh I've had all week.

Our local school district gives out televisions and a car each year for not missing any days, so the cell phone crack is not to hard to imagine.

In a time when practical experience matters most, why are we still caught up in the travails of "test-taking"? Are we still leveraging our students to make it 5,6-figure student loans when they can get online associate degree at a much lesser price?